Exterminate Arb and eat it

Bogar (ボガール, Bogāru), also called Bogal, is the main antagonist of the first half of Ultraman Mebius. She is a monster that eats other monsters and lifeforms.

In the prequel to the Ultraman Mebius series, Bogar first appears on the planet Arb. While Ultraman Hikari was training with Ultraman King, Bogal immediately started destroying the planet, turning dead stone. Once Ultraman Hikari returned to find the house under attack, he tried to fight off the aliens, but Bogal was too strong for him to fight. Arb tries to watch Bogar as well, but his efforts are in vain as a large number of their spirits are eaten by the aliens. The depressed Hikari continues to fight Bogar, but still he is defeated by the aliens for the reason and thus Bogar leaves Hikari with a crushed spirit on a dead planet.

At the start of the series, Bogar disguised himself as a woman to hide from Ultraman Mebius, who was also on Earth. Bogar is responsible for bringing monsters to Earth to attack by waking them from their sleep or summoning them from outer space. After Tsurugi arrives on Earth, Bogar starts devouring the other monsters he has released in desperation to start raising his body temperature for a huge explosion. GUYS's actions were first discovered by the GUYS when they found him devouring some Sadora. He then appears on the ocean floor to release the Twin Tails to lure Mebius into a trap to kill him himself. Sure enough, Ultraman Mebius appeared and after a long battle managed to destroy the Twin Tail, but the fight exhausted him so that Bogar revealed himself to try and eat Mebius. Fortunately, Hunter Knight Tsurugi appeared again and managed to drive out Bogar.

Bogar appears again when the "C-Pin 929" Alien Fanton is being transported back to his ship and plans to eat it to make it more unstable. Luckily Mebius appeared on the scene and managed to hold Bogar back long enough for the C-Pin 929 to be transported to safety. Bogar angrily tries to eat Mebius again out of frustration, but to no avail and is forced to retreat again when Tsurugi is about to face him. However during the battle, Bogar's electrical weakness is revealed and work is being done to improve Miclas' ability to aid GUYS in fighting Bogar. Bogar then appears in the Tsuruga Mountains where he goes back to eating more monsters until he is confronted by GUYS and Miclas. Although Miclas had an increase, Monster Manquette could not stand Bogar's psychic abilities and was only able to inflict a small amount of electricity before disappearing. Ultraman Mebius returns to fighting again, but the battle with Bogar is interupped until Hunter Knight Tsurugi arrives to fight as well. In the end, Mebius managed to weaken Bogar enough for him to use Mebium Shoot, but Bogal managed to molt his skin before he could be destroyed, running away again.

Bogar's last appearance was near Fujikita City where he ambushed and ate the other Gudon and Twin Tail monsters, growing increasingly unstable and dangerous. GUYS arrives to stop Bogar as he is about to enter Fujikita City and Miclas is deployed again. This time, however, Miclas has a better chance and manages to electrocute Bogar completely. However, the electric current released by Miclas turned Bogar into a more powerful Bogarmons.

After absorbing Miclas' attack, Bogar transforms with her newfound power into a much stronger form known as "Bogarmons", and Bogarmons easily defeats Miclas and starts attacking GUYS head on. Ultraman Mebius seems to be dealing with Bogarmons, but this time Bogamons is clearly superiuor than her previous form and almost engulfs Mebius until GUYS steps in to stop him. After a story of encouragement from the crew, Mebius defeats the Bogarmons and Tsurugi's sudden appearance is able to guard him and destroy him almost until the Bogarmons escape.

After tracking Ultraman Mebius 'whereabouts via Mirai, the Bogarmons head to the GUYS headquarters to kill him, but he is blocked by GUYS and manned into a trap set on the island to prevent Bogarmons' explosion and was trapped on the island when several guns began firing at him to destroy him. However, the gun was not strong enough and was quickly destroyed by Bogarmons. With no other choice, Ultraman Mebius and Hunter Knight Tsurugi appear together to fight the Bogarmons while the GUYS are ready, waiting for them to break through a magnetic field wide. With Mebius and Tsurugi working together, Bogarmons was no match for the two and struggled until she finally died with a combination of Mebius' Mebium Shoot and Tsurugi's Knight Shoot. However, the core was shaken by their combined explosion and exploded, but thanks to the magnetic barrier, her body shattered without any damage.

Lesser Bogars is responsible for opening the Ultra Zone to allow Alien Empera to enter Earth. They are creatures more ferocious than the original Bogar that appeared on Earth. While GUYS is investigating the ship that crashed inside the Ultra Zone, two of the Lesser Bogars attack them. While they managed to kill one of them, the others continued to eat their gang and grew up to be huge to face the GUYS themselves. Fortunately Ultraman Mebius appeared and managed to fight the giant Lesser Bogar until GUYS was able to escape from the Ultra Zone and Lesser Bogar was destroyed by Mebius's Mebium Knight Blade.

However, three Lesser Bogars managed to break through the Ultra Zone and were attacked by Mirai on earth out of revenge. Mirai managed to kill 2 of the Bogar, but the third went on to eat their remains and grew into a giant form to kill Mirai himself. While it manages to knock Mirai out, GUYS is summoned to deal with Bogar once again. However after eating 2 of its own types, this Lesser Bogar is stronger than the previous ones in the Ultra Zone and thus manages to ensnare Ryu or GUYS with its tongue in hopes of eating it in the Ultra Zone. Fortunately, Mirai regained consciousness and transformed into Ultraman Mebius just in time to save Ryu and battle Lesser Bogar. Unlike its predecessors, this Lesser Bogar was too heavy for Mebius to handle and easily slammed the Ultra onto the ground several times with its tongue. With GUYS's help, Lesser Bogar tries to escape again, but Mebius quickly destroyed Bogal and finally exploded.

Ark Bogar is the ruler of Bogars and the smartest of Bogar, appearing in Ultraman Mebius Gaiden: Super Galaxy Wars, and briefly in the Special DVD.

However, when Alien Empera killed by Mebius Phoenix Barve and Zoffy, the seal went with him. Ark Bogar then appeared and assaulted Ultraman Mebius, Ultraman Hikari, and Ultraseven in a burning grudge through the dimensional portal, but was sent back when Mebius, Hikari, and Seven fought her with their power. 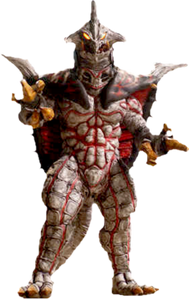 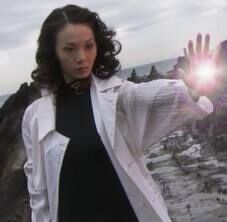 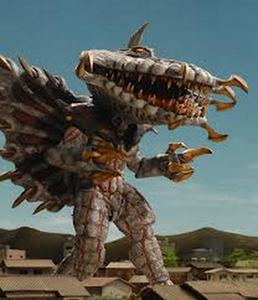