Demonic physiology
Possession (in his shadow-form)

Torture and kill all mutants (failed).

Douglas Carmody, better known as Bogeyman, is a supervillain in Marvel Comics. He is primarily an enemy of Power Pack. He is an unrelenting bigot and a terrorist who sees all mutants as evil yet has always been a cruel and violent individual himself, to the point he regularly tries to torture and kill innocent children.

Originally a normal human, Bogeyman would be transformed into a demon during the events of Inferno and continued his crusade against mutants, still intent on killing them for being "freaks" despite his own status resembling a monster. During this event, he also murdered many humans for their "lawlessness" during the invasion, and he also murdered a man simply for being obese (despite his own rather obese appearance). This shows that as a demon Bogeyman's psychopathic violence was much more open and he no longer held back as he did during his mortal life, though he still preferred to hunt child victims over adults and shows great sadism in his new role as a literal "bogeyman" figure.

Bogeyman is known for committing hate crimes but his two worst crimes have been when he captured the Power Pack parents and forced the Power Pack to reveal their powers to said parents, causing major psychological trauma. He then proceeded to drag the parents around a hellish New York during Inferno and nearly killed them.

Bogeyman's second worst crime was when he manipulated a young mutant girl, kidnapping her and firebombing her home before planning to sell her to demons.

Another notable atrocity committed by Bogeyman was when he managed to possess Luke Cage and caused the hero to commit a massacre. This resulted in the monster finally being defeated by the combined efforts of the Fantastic Four themselves, with the Human Torch exploiting Bogeyman's fear of fire to finally free Cage and send Bogeyman back to Hell.

As a demon Bogeyman is a living sponge capable of absorbing vast amounts of damage as well as giving him shape-shifting properties that allow him to become akin to liquid, in addition he has horrific claws and teeth by which to tear and bite at victims. Prior to being a demon, he used to work for the Right and had numerous power-suits. He is also an utterly ruthless criminal with no qualms about harming (and even killing/torturing) young children (In fact, he delights in such acts and has specifically targeted children over adults, making him a truly heinous individual, even by supervillain standards).

He was later revealed to be able to possess others via a dark ring, allowing him to also take on a more shadowy form. He used these new abilities to possess Luke Cage but was vulnerable to fire (which he feared due to events in Inferno), but this would lead to his ultimate defeat at the nuclear flame of Human Torch.

Bogeyman is a sadistic, xenophobic terrorist who has developed an obsessive hatred of the Power family due to the fact they unconditionally love their children, despite the children being mistaken as mutants by Bogeyman. He strongly believes parents who still love and protect their children after said children are revealed as mutants are traitors to humanity and he enjoys tormenting and killing such individuals when he can.

Bogeyman's most disturbing trait, however, is that he finds great satisfaction in stalking and torturing children over adult prey, he tries to justify his actions via saying mutant children are not human and evil, yet he is happy to make deals with Hell itself to achieve power and his demonic form has even been suggested as being a physical manifestation of the true "ugliness" within his very soul.

Bogeyman's dark, psychopathic personality can easily be seen when the mutant mystic known as Magik once found out his true desire in life, which was to become rich on the murder of countless innocent mutant children. The desire was so depraved Magik banished Bogeyman to Hell itself, being disgusted with his nature (this is notable since Magik has grown up in Hell-realms and been exposed to many demonic overlords with depraved personalities, yet still saw Bogeyman's goal as shocking).

Bogeyman is also a deeply violent hypocrite, for example he murdered several humans during a demonic invasion for offending him with their lawlessness, only to murder an obese man who was cheering on his actions simply for "letting himself go". He is also very fond of xenophobic rants about mutants and how they are abominations against nature, while flying into a rage if confronted with his own inhuman appearance. 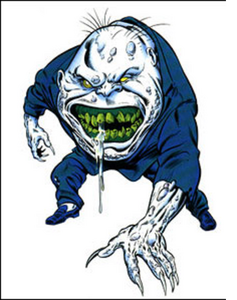 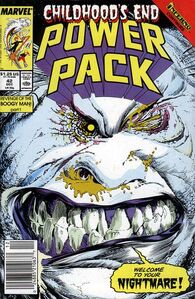 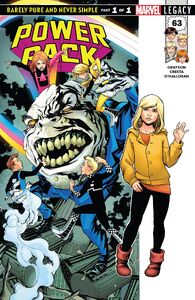 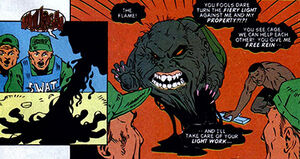 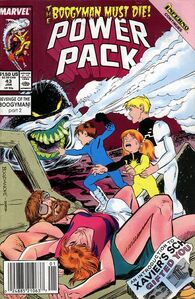 Bogeyman on the Pure Evil Wiki.