Hunt down Murphy and Anne.

The Bogeyman is a monster that appears to Murphy Pendleton numerous times in his journey through Silent Hill and a major antagonist from Silent Hill: Downpour.

The Bogeyman is a hulking humanoid monster that has no visible features thanks to his outfit, a hooded raincoat with a number of chains, studs, and stitches on it, a gas mask, large rubber boots, and rubber gloves. The Bogeyman constantly carries his signature weapon with him, a large sledgehammer that apparently consists of a cinderblock on the end of a length of metal pipe. The Bogeyman’s appearance is unique amongst the monsters of Silent Hill since he has no visible deformities or garb resembling torture implements. The Bogeyman moves slowly, but with deliberate determination. He is a cruel murderer, swiftly and efficiently killing a child by snapping his neck with one hand, and has a habit of making the “shhh” gesture. The Bogeyman is extremely strong and with his sledgehammer, he can kill most other monsters with one swing and destroy architecture. He can also slam it into the ground, sending out shockwaves that he can aim at his targets.

Murphy first saw the Bogeyman when he was being chased through the Otherworld by the Void, walking down the hallways he was running down. The Bogeyman turned back to face Murphy, before the floor collapsed, causing him to fall into another area of the Otherworld. Later on, Murphy had found the verses of a poem that could supposedly keep “the Bogeyman” away, which a little boy, who greatly resembled his son, Charlie, told him about. After returning to the boy with it, the Bogeyman suddenly appeared, advancing out of the shadows on the boy, who seemed completely oblivious to the monster. Murphy tried to warn him about the Bogeyman to no avail as he tried to remember the poem. Eventually, the monster grabbed the boy by the neck and held him up and Murphy yelled at the Bogeyman to leave him alone as he continued to try to remember the poem. But he couldn’t finish before the Bogeyman snapped the boy’s neck and made the “shhh” gesture before disappearing into the shadows.

Eventually, Murphy began chasing after a little girl through an Otherworld version of the orphanage, trying to protect her from the Bogeyman. He appeared to Murphy a number of times, trying to stop his progress by attacking him or destroying the architecture. Murphy managed to eventually get out of the Otherworld, awakening in the chapel’s morgue. The nun working there then asked him to sign for his dead son and Murphy said it was impossible that she had his body since he’d buried his son years ago. The nun pulled the sheet off of the body on a gurney, revealing the apparently dead Bogeyman.

Murphy angrily said that wasn’t his son, but the nun told him to accept the creature as his own, telling him about the perils of revenge and the path he’d condemned himself to by seeking it. Murphy began to mentally breakdown, admitting that he’d screwed up and his killing Patrick Napier probably didn’t solve anything, but still tried to justify his actions. Murphy then saw the keys to a boat that could allow him to escape Silent Hill around the Bogeyman’s neck and tried to take them. However, the monster suddenly began moving, grabbing Murphy and throwing him into a wall. Murphy awoke in what was apparently a version of his old home and heard Charlie crying for help. He ran to a lakeside following the cries, only to be confronted by the Bogeyman, who rose out of the water. They fought each other and Murphy managed to bring the monster down, smashing him in the head with his sledgehammer.

He awoke back in the morgue with the Bogeyman back on the gurney, his mask gone and his face switching between Murphy and Napier’s as the lights flickered. Murphy lamented losing his son again, but an image of Charlie appeared, congratulating him for defeating the Bogeyman and telling him not to blame himself for Charlie’s death. Much later, as Murphy explored the Otherworld version of Overlook Penitentiary, he could hear the Bogeyman off in the distance, apparently hunting Anne Cunningham. In Murphy’s final confrontation with Anne, she was revealed to be seeing him as the Bogeyman and shot him in the shoulder, apparently making him blackout. The Bogeyman began chasing after Anne, who repeatedly shot at him and released Prisoner Juggernaut monsters to fight him. However, her efforts did not deter the Bogeyman who managed to defeat her and knock her to the ground. What happened then depends on the player, who can choose to kill Anne or spare her, which determines what ending the player gets.

The Bogeyman represents the desire to judge others, which is the opposite of Pyramid Head or the Butcher. He may also represent the perils of seeking revenge and the fact that relentlessly pursuing vengeance can bring more suffering than one had to begin with. However, the Bogeyman could instead be the representation of the monster the characters view others as, i.e. how Murphy views Napier or how Anne views Murphy. He can also be the manifestation of the perceptions people use to rationalize their own wrong-doings and exists to allow a person to find someone else to blame. The Bogeyman doesn’t seem to be the manifestation of one person’s psychological problems, while other monsters represent a single man’s trauma. To Murphy, the Bogeyman is Napier and a terrible monster, because he wants to believe he was right to kill Napier. To Anne, the Bogeyman is Murphy, and she sees Murphy as a monster for apparently murdering her father, so as to justify her desire to kill him. 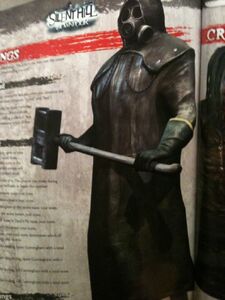 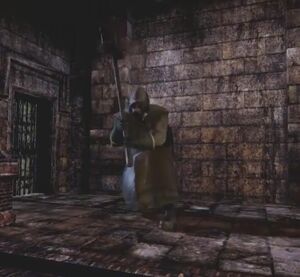 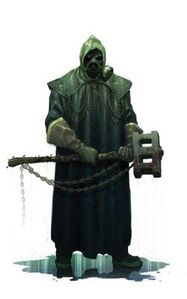 The Bogeyman aka "Hammer Man" and "The Judge".
Add a photo to this gallery

Retrieved from "https://villains.fandom.com/wiki/Bogeyman_(Silent_Hill)?oldid=3818788"
Community content is available under CC-BY-SA unless otherwise noted.