Walter "Walt" Boggis, Nathaniel "Nate" Bunce, and Franklin "Frank" Bean (collectively known as Boggis, Bunce and Bean) are the three main antagonists of Roald Dahl's 1970 book Fantastic Mr. Fox and Wes Anderson's 2009 stop-motion animated movie of the same name. After Mr. Fox steals from their farms, Bean calls a meeting between the three and plans to obliterate Mr. Fox and his family.

Boggis was voiced by Robin Hurlstone, Bunce was voiced by Hugo Guinness, and Bean was voiced by Michael Gambon, the latter of whom also portrayed Albert Spica in The Cook, The Thief, His Wife, and Her Lover, Jan Jarmokowski in The Beast Must Die, Lt. General Leland Zevo in Toys, and Eddie Temple in Layer Cake.

Walter Boggis tends to extremely hate Mr. Fox due to his constant theft of his chickens, which the foxes seem to like. His farm is the first in a three-stage plan by Mr. Fox to steal food for his family. The farm plan initially consists of a few aged beagles, whom Mr. Fox tranquilizes with blueberries laced with sleeping powder. He and his accomplice Kylie are then confronted by an electric fence, a security measure missed in the heist plan. Fortunately for them, an opening to a closer chicken farm is available, allowing the two thieves to succeed in their plan, despite triggering an alarm. No sooner do they leave (via climbing up the still-active electric fence) does Boggis arrive, armed with a shotgun and two employees. He only finds his unconscious beagles and a single blueberry, which knocks him unconscious after eating it.

Nathaniel Bunce has heartburn, possibly because of the goose livers, which gives him a horrible temper, meaning he is constantly angry. After stealing chicken livestock from Boggis' farm, Mr. Fox and Kylie journey to Bunce's farm, where despite a series of security cameras tracks their every movement, they easily evade capture. This is due to Bunce completely ignoring the camera monitors and reading a magazine on the Alpine mountains. A considerable supply of frozen ducks and geese are stolen as a result.

Franklin Bean never bathes or washes at all; with the result that he smells and his ears are all clogged up with wax and dirt and such things. Bean is the smartest of the three farmers, very cold and calculating. He always remains flat in his tone, but can lose his temper, when in such he would rage out of control and proceed to wreck anything within reach. He also possesses a certain degree of condescension for Boggis and Bunce upon meeting them, where he inquires as to their well-being, then continues without giving them a chance to reply. Bean is shown to be leader of the group as well as the most intimidating.

Boggis, Bunce and Bean are incredibly wealthy and Mr. Fox has been stealing their livestock to provide food for his family. However, the farmers are tired of being outsmarted by Mr. Fox and attempt to ambush him at his home on a hill, only to shoot off his tail. The farmers try to dig them out first with shovels then shoveling machines, but Mr. Fox and his family dig further underground to escape them. Worse still, when their neighbors come to see what they're doing, they are immediately made a laughingstock of, but they refuse to give up and vow not to return to their farms untill they have caught Mr. Fox. The farmers then decide to camp on the hill and starve Mr. Fox out. They also ask all the men on their farm to surround the very bottom of the hill, in case Mr. Fox finds a way out, so they can definately capture and kill him (and possibly every last animal in the wood, according to Badger). Three days later, the fox family and the local animals are doomed to starve. However, Mr. Fox comes up with a plan to raid the farms with the help of the other animals, while the three farmers are still waiting at the hole. It's unknown what happened to them after this but the end of the book says: "And so as far as I know, they're still waiting."

When Mr. Fox moves into his tree home, he notices the farms owned by Boggis, Bunce and Bean and hatches a plan to raid their farms with the help of his opossum assistant, Kylie. Badger warns him about the farmers, but Mr. Fox ignores him. Mr. Fox and Kylie head over to Boggis' farm and raid his chicken house, while drugging the guard dogs with blueberries. Boggis heads over to kill Mr. Fox, but gets drugged out when he finds a blueberry. The following night, Mr. Fox and Kylie head over to Bunce's refrigerated smokehouse and raid the frozen ducks and geese as they manage to get past Bunce's security cameras, due to Bunce completely ignoring the cameras. Mr. Fox and Kylie then head off to Bean's cider cellar with the help of Mr. Fox's nephew, Kristofferson. Upon entering, they are confronted by Bean's enforcer Rat and are almost caught by Bean's wife. However, they manage to steal the bottles of cider and escape.

Meanwhile, Bean calls in a meeting between Boggis and Bunce and they hatch a plan to ambush Mr. Fox at his home. Mr. Fox and Kylie exit the tree and the farmers fire at them, but they only succeed in shooting off Foxy's tail. The three farmers then use shovels to dig out Mr. Fox and his family, but they manage to escape the trio by digging underground. The next morning, the three farmers use backhoes to continue digging and the fox family dig further into the earth as the farmers destroy their tree. Bean then starts to wear Foxy's tail as a necktie and they explode the fox residence. Bean assembles an army of farmhands to starve the fox family out as they level an entire forest, forcing the local animals to hide. Three days later, however, Foxy comes up with a plan to raid the farms with the help of the other animals and they rob them clean.

An enraged Bean is informed by Petey about the incident and wrecks the trailer until he comes up with a plan to flood the animals with cider, while blocking the manhole with his station wagon. Meanwhile, Ash and Kristofferson sneak off to steal Foxy's tail back, but they are caught by Mrs. Bean. Ash escapes, but Kristofferson is captured and locked in an apple crate. Mr. Fox decides to surrender himself to the farmers, while Badger and the other animals search for Kristofferson, where they are confronted by Rat. Rat throws Bean's ransom note to Badger, but Ash reveals himself to be Mr. Fox's son and Rat attempts to kidnap him. Mrs. Fox tries to fight Rat, but is no match for him and Rat kidnaps Ash. However, Mr. Fox arrives in the nick of time and fights him before fatally electrocuting him, to which Rat finally reveals Kristofferson's whereabouts before dying.

Mr. Fox comes up with a plan to rescue Kristofferson and sends a letter of surrender to the farmers. Bean assembles an ambush, but Foxy and his friends launch an attack on the snipers. Mrs. Fox makes an explosion to distract the farmers, while Foxy, Kylie and Ash steal a motorbike to head to Bean's farm and rescue Kristofferson. Foxy distracts the rabid guard dog, Spitz, while Kylie and Ash head off to save Kristofferson. After rescuing Kristofferson, Foxy and his friends try to escape the farm, but are confronted by the farmers and their employees. Foxy condemns the farmers for their crimes and demands them to give his tail back, but the farmers open fire upon them. Ash heads out and courageously dodges the farmers' gunfire before he manages to unleash Spitz upon the farmers. The rabid beagle rips Foxy's tail off Bean and viciously tears it, forcing the three farmers to go above ground, while Foxy and his friends manage to escape with his tail. While Spitz is jumping at the farmers, Bean contacts Petey and requests him to bring them a ladder.

Three days later, the trio decide to wait at the manhole for Mr. Fox to come out, as they are convinced that he could not survive in the sewers, while Foxy and his family head over to their international supermarket and feast on their products. 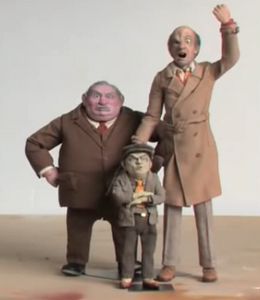 Models of the three farmers.

The trio furious after their failure to kill Mr. Fox. 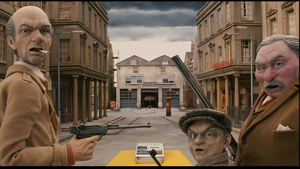 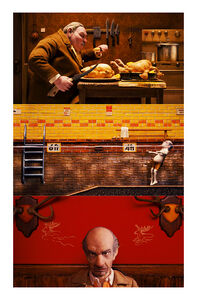 The trio as seen in the movie. 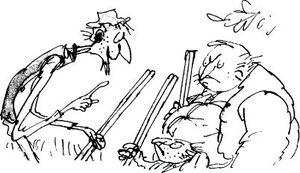 The trio in the original book. 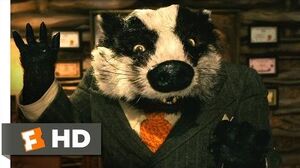 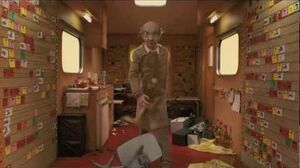 My reaction to Netflix taking my shows off streaming 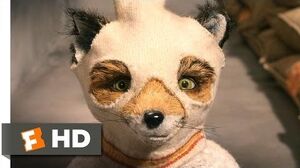