Consume everything in their path.

Provide food to the Queen in order to produce more Tao Tei.

The Bohrok are the main antagonistic faction that were first introduced in the 2002 storyline of the BIONICLE series. They are insectoid mechaloids whose main goal was to clean all the matters from the island of Mata Nui to ensure that the Great Spirit will rise again. They are also led by the twin queens of the swarm, the Bahrag duo Cahdok and Gahdok.

Although they are neutral, they appeared as villains at first from being awoken by Makuta Teridax, who provoked them into attacking the Toa Mata, Matoran and Turaga on the island until the swarm was defeated following the Bahrag's defeats at the hands of the Toa Mata. Later, they were reawakened once more when the Toa Mata, who had became the Toa Nuva, freed the Bahrag and they resumed their original goal as well as assisting the heroes with defeating the Brotherhood of Makuta and their army.

Prior of the major events of the series, the Bohrok were created by the Great Beings based from the Baterra's designs. Their sole purpose was to clear the island of Mata Nui's environment to prepare for the Great Spirit's departure.

While serving the Makuta, the Toa Hagah once encountered and defeated a Bohrok swarm. It was around this time that the Brotherhood of Makuta began experimenting on the Bohrok, hoping that they could buy time so Teridax could become stronger.

In Metru Nui, Onu-Matoran miners stumbled upon a swarm of Bohrok and discovered they were fully mechanical while their internal Krana were organic. One archivist named Mavrah theorized that the Bohrok were once biomechanical, but evolved to a point where they were only made of mechanical pieces. When the Archives were destroyed, the nest of Bohrok was left untouched.

When Takua followed the Toa Mata into Makuta Teridax' lair, he accidentally awakened a Bohrok. When the one Bohrok awakened, the rest of them began to awaken. Fortunately, Takua was able to escape.

The Bohrok then went to the surface of Mata Nui to begin cleansing it. Initially, they showed no interest in attacking the Matoran unless the Matoran attacked them. But when the Toa and Matoran began forming a resistance against them, the Bohrok began to target the villages and subdue the resistance.

When each Toa returned to their respective Koro, they found Bohrok destroying the trees, ice, lava, and mountains. The first victory was won in Ta-Koro.

In Le-Koro, the Krana took over the Matoran and put them into the hive. When Lewa discovered this, he was put under a Krana's control himself.

The Toa eventually went into the Bohrok's nest and found it strangely empty. They discovered the Exo-Toa and used them to fight the Bahrag. The Bahrag were defeated and imprisoned in chutes of energized protodermis.

After the defeat of the Bahrag, the Bohrok lost their Krana and were reprogrammed to serve the Matoran. Years later, they completed cleaning the island of Mata Nui and went back to sleep. 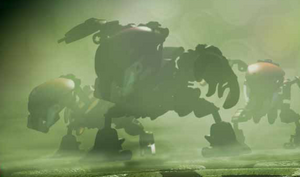 The Bohrok awaken from their nest. 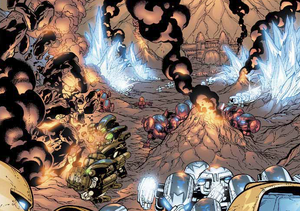 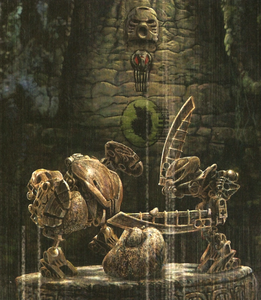 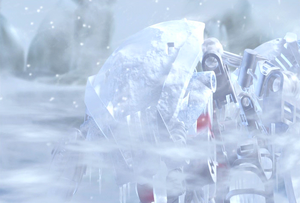 The group of Bohrok froze by Kopaka. 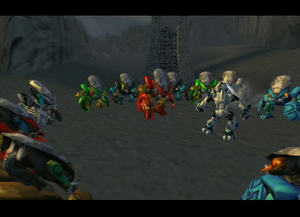 Kopaka facing the group of Bohrok in the game. 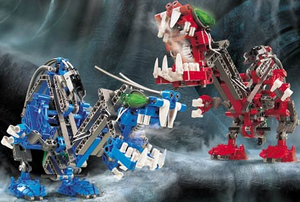 Concept art of the Bohrok.