Leader of the Galaxy Soldiers

torturing people before killing them.

Bojack is an alien tyrant and the main antagonist of the 1993 film Dragon Ball Z: Bojack Unbound. He is the leader of the Galaxy Soldiers and one of the most dangerous beings the Kais ever faced.

He was voiced by Tesshō Genda in Japanese and Bob Carter and Doug Rand in English.

Bojack has a bloodthirsty personality, watching his crew defeat several with a smile on his face. He is capable of getting caught up in the rush of battle, as seen when he kills Zangya simply because she was in his way of battling Gohan. He is rather sadistic, gaining great pleasure in dominating victims. He is also very arrogant, as his name suggests, firmly believing he can win any battle and enjoying all moments of praise he attains from anybody.

Bojack and his crew were designed by Akira Toriyama, the original manga author, for Toei's theatrical production. Toriyama's designs can be seen in Daizenshuu 6. Bojack is depicted as having a muscular build, and resembles something of a gypsy-pirate. His skin is colored teal, his long hair is orange and he has a long scar scaling his face.

Bojack has a maximum-power transformation which renders his skin chartreuse, his hair red and his muscle mass increased over the top (a trait which numerous foes encountered in Dragon Ball possess). His outfit is also shredded by the transformation.

Bojack was at some point, sealed away inside a star by the Kais after they saw how dangerous he was and his desire to conquer the universe. How they sealed him despite his power is unknown.

After King Kai's planet was destroyed by Cell's self destruction attack, the seal holding Bojack where he was was broken and he escaped. He then found his way to Earth by tracking the energy caused by the Cell Games, accompanied by his crew, Bido, Bujin, Kogu, and Zangya. Upon arriving, Bojack secretly took control of a martial arts tournament being held by a billionaire named X.S. Cash, so as to wipe out anyone who could challenge him. He sent his men to take the place of the fighters meant to fight the finalists, then went to wait in a ruined city. Later, when the Z Fighters got wise to his plans and went to challenge him, Bojack watched while his minions took on and managed to defeat them. After Gohan was brought to his knees, Bojack prepared to finish him off with one of his attacks, Grand Smasher, only for Piccolo to arrive and deflect it with his Special Beam Cannon. They proceeded to fight and Piccolo found himself quickly defeated, but before Bojack could deliver the final blow, Trunks fired a barrage of energy blasts at him. However this had no effect, since Bojack erected an energy shield around himself. He then took on a newly arrived Super Saiyan Vegeta whom he also defeated and he then decided to enter his maximum power form.

Bojack and his minions then attacked Gohan and managed to pummel the boy. Although Mr. Satan is able to not only cause a distraction, but also save Gohan from being killed by a move from Bido, Gohan is still no match, and gets pummeled and dominated until he is smashed into a building. Bojack then picks up Gohan and gives him a satisfying bearhug, sadistically laughing and preparing to squeeze him to death, as a way of thanking Goku for his part in freeing him and his minions. After a wait, Gohan passes out from the power of Bojack's bearhug. Just as the space tyrant was about to crush him, Goku, no longer able to watch such brutality, made a brief reappearance and catches the powerful brute off guard by punching Bojack in the face, having broken the rules of death briefly. With the encouragement from his father, Gohan then transformed into a Super Saiyan 2 and easily destroyed both Bido and Bujin. Bojack sacrificed his last minion, the fearful Zangya, whom he used as a distraction so as to fire an energy blast through her at Gohan (though did so with a very sadistic and insane look on his face). He dodged this and landed a punch right through Bojack's stomach, when the tyrant attempted to hit him head on. Bojack attempted to finish Gohan with his most powerful attack, the Galactic Buster, which the half-Saiyan countered with his Super Kamehameha. When these attacks collided, it created an explosion that the two fighters rushed at each other through. Gohan managed to finally defeat Bojack with one final punch, destroying him.

Bojack has superhuman abilities and the power to manipulate Ki Energy in the forms of Flight, a Psycho Barrier energy shield, and destructive Ki Blasts. He can transform into a Super-Herajin or Super Bojack, amplifying his powers several times over. His final form let him defeat Gohan, Vegeta, Future Trunks, and Piccolo with ease despite the former three being in their Super Saiyan forms. This makes him capable of possibly destroying an entire Solar System at his full power.

His power level in his Super Bojack (also known as a Full Power Hera-Seijin) is theorized to be around Perfect Cell's level. And Perfect Cell's power level is listed as 900,000,000 (or 1,079,956,055 in a Special Mission). So it could be most likely this or possibly even higher to touch the low billions section.

Bojack right-hooks the opponent, and proceeds with a double axe handle. Next, he kicks the opponent in the air and finishes with a left hook kick away, inflicting a great deal of damage. The attack was named in Dragon Ball: Raging Blast 2.

A Defensive Ki technique where Bojack wraps himself in Ki that protects him from attacks. He can then detonate it in a burst that sends the attacker flying. It was named in Dragon Ball: Raging Blast 2.

A Energy Shield used against Future Trunks that damages anyone who touches it. It was named in Dragon Ball: Raging Blast 2. Cooler also uses this technique.

Bojack charges at the opponent and elbows them. He then catches them by their leg and throws them up into the air. Next, he moves up in the air and punches the opponent twice before grabbing and headbutting them on their head. Finally, Bojack teleports to the opponent and upside down kicks them down to the ground, inflicting a massive amount of damage. It was named in Dragon Ball Z: Budokai Tenkachi.

Bojack raises his hand toward the opponent and forms a big, bright-green energy sphere and says "Off you go!". Then, he fires the attack at his opponent by drawing his hand a little backwards, only to thrust it forward at high speed. The Grand Smasher flies at the opponent in form of a big, green ball with a short, green flaming tail, inflicting a huge amount of damage. The attack can also be fired as a large blast and can chase down it's target. It was first named in Dragon Ball Z: Super Butōden 2.

Bojack uses Rapid Movement to get behind the opponent, pushes the opponent forward and fires a Grand Smasher through them, inflicting a huge amount of damage. It was named in Dragon Ball: Raging Blast 2.

Bojack flies toward the opponent as he charges a Grand Smasher in his hand. He then shouts "Take this!" as he places the Grand Smasher over the opponent's chest and causes it to explode, blasting the opponent away and inflicting a great deal of damage. It was named in Dragon Ball: Raging Blast 2.

The most powerful variation of the Grand Smasher: Bojack puts his hands together in front of himself and charges a large, green energy sphere. Then, he spreads his arms out at his sides, splitting the single sphere into two, and finally throws his hands downward to fire the energy spheres in the form of two energy waves at the opponent, inflicting a massive amount of damage. It was first named in Dragon Ball Z: Super Butōden 2. 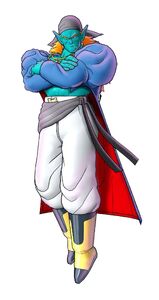 Bojack's base form in Raging Blast 2. 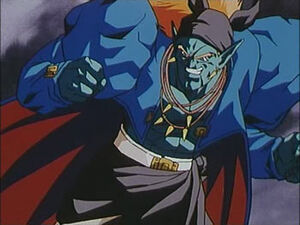 Bojack about to fire his Grand Smasher technique against Piccolo. 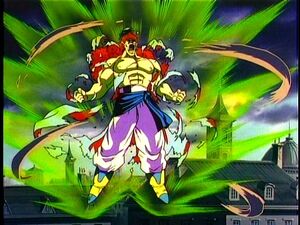 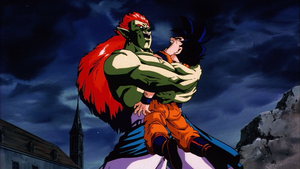 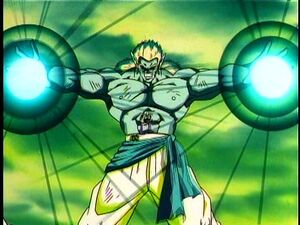 A desperate and beaten Bojack prepars his ultimate attack, the Galactic Buster. 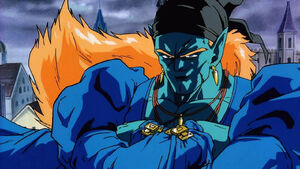 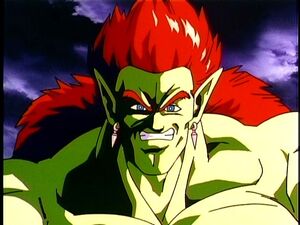 An angry and desperate Bojack. 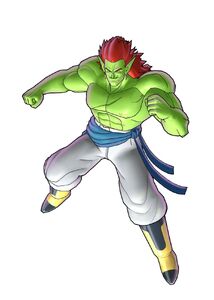