Bolg of the North

Spawn of Azog the Defiler (by Legolas, in The Hobbit trilogy)

Maintain his ruler over Mount Gundabad.

Help Azog and Sauron in their quest (both succeeded).
Take the treasures of the Lonely Mountain.
Kill Thorin, Bilbo, and the Thorin company (both failed).

In the original book of The Hobbit, Bolg was the son of Azog the Defiler, succeeding him after his death in the Battle of Azanulbizar in TA 2799 by Dáin who became Dáin Ironfoot. He has resettled in the old refuge in Mount Gundabad after the kingdom of Angmar was abandoned, and apparently ruled goblins of the Misty Mountains from their capital at Mount Gundabad during the Battle of the Five Armies.

Bolg ruled the northern Goblins for about 150 years, and led the army of Goblins, Wargs, and Bats in the Battle of the Five Armies, in which he took his two bodyguards with him. In the battle, he fatally wounded Thorin Oakenshield, as Fíli and Kíli died defending him.

Then, Thorin died, and as a result, he was later crushed and killed by Beorn, a skin-changer who could turn into a mighty black bear, avenging Thorin's death.

The Desolation of Smaug

Bolg appears when Azog is summoned to Dol Guldur in service of their master, Bolg is sent by his father to take it from here and lead the orc pack to find and kill Thorin, the hobbit Bilbo Baggins and the Dwarven company. They track the Dwarves to the Elven Kingdom of Mirkwood ruled by Thranduil, where the Dwarves were escaping captive thanks to Bilbo, by riding in floating barrels in the river, using the current to bring them further downriver, unaware of the orc's arrival.

Bolg was leading the orcs to an unguarded gate where the Dwarves were headed, but the Elves interfered again trying to stop the Dwarves. Bolg and the orcs then saw no other choice but to reveal themselves to the elves and fight them and the Dwarves. When Bolg noticed dwarf Kíli trying to open the gate to help the others escape, Bolg shot him with a poisonous Morgul arrow. When they were about to finish him off, the elf warrior, Tauriel saved Kíli's life a second time and Bolg ordered they kill her, giving Kíli enough time to struggle his way to lift himself up, pull the lever and open the gate, and escape with his fellow comrades.

Bolg orders the orcs downriver to pursue them, but the dwarves easily fight them off and escape, and are later smuggled into Lake-town, Esgaroth by a bargeman named Bard and make their way to the Lonely Mountain, but they left behind Filli, Bofur, Oin and a wounded Kíli where tend to him in Bard's house. Later, Bolg and orcs sneaked into Lake-town, hot on the dwarves' trail, they break into Bard's house and attempt to kill everyone, but Tauriel and Legolas arrived just in time to save them and fight off the orcs. The orcs retreated and Bolg told them to send word to Dol Guldur that the company had reached Erebor.

Legolas pursued Bolg while Tauriel healed Kíli with elven magic using the weed that Bofur retrieved from the pigs that were about to be eaten by them at the time. Bolg and two orcs fought Legolas while the rest of the orc pack left for Dol Guldur. Legolas cut down the two orcs and then fought Bolg. After Bolg gained the upper hand, he left Legolas to be dealt with by two more orcs. Bolg fled to Dol Guldur with Legolas in pursuit after the latter killed the two orcs.

After fleeing from Lake-Town, Bolg is seen meeting Azog and the orc army as they march on the lonely mountain. Azog orders him to travel to Mount Gundabad in the north after he hears that Bolg fought, but did not kill Legolas in Lake-Town. Legolas and Tauriel later witness Bolg leading the orc forces from the fortress at Gundabad towards Erebor.

Bolg arrives at the Battle of the Five Armies during Thorin's final fight with Azog at Raven Hill. He comes across Tauriel, who is looking for Kíli, and nearly kills her, were it not for the latter's timely intervention. After a struggle Bolg fatally stabs Kíli, prompting Tauriel to take him with her over the edge of a cliff. Bolg is about to attack Tauriel as she lies wounded from the fall, but Legolas topples a stone tower across a frozen waterfall and comes forth to face Bolg, saving Tauriel from death.

As Legolas battles Bolg with Orchrist, he sees Thorin about to be slain by an orc atop the waterfall and throws him the sword, killing the orc. He then uses his daggers to fight Bolg as the tower crumbles. While Bolg has the upper hand for most of the fight, Legolas ultimately wins in the end by swinging up into his shoulders and stabbing him through the skull with a dagger, killing him. The Extended Edition shows that Legolas twists the dagger, scrambling Bolg's brain. Legolas leaps free as the tower crumbles, and Bolg's lifeless body falls to the ground, his head being crushed by a falling stone from the tower. 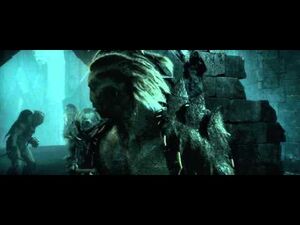 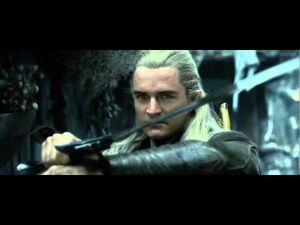 The hobbit The Desolation Of Smaug "Legolas vs Bolg" 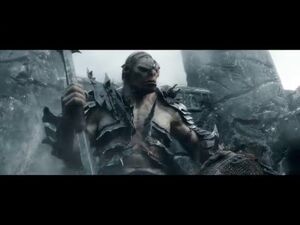 The Hobbit The Battle of the Five Armies Kili's Death 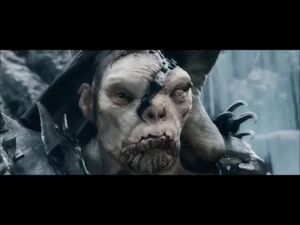 The Hobbit The Battle Of The Five Armies Extended Edition