Studying the work of Mutants.

Get the United States to fund his Sentinel Program against Mutants in order to kill all mutants.

Bolivar Trask is one of the three main antagonists in the past timeline of X-Men: Days of Future Past. He is the head of Trask Industries and creates and army of Sentinels to destroy mutants.

X-Men: Days of Future Past Prelude

Trask experimented on mutants for their DNA to create robots called Sentinels whose sole purpose is to track and kill mutants (despite Trask having respect for them). Among those he experimented on and killed were Azazel, Angel, Emma Frost, Banshee, and Riptide (though a viral marketing suggests Azazel and Angel were dead before Trask experimented on them), although Mystique was able to save Havok, Toad, and Ink from this fate. Mystique sought revenge on Trask for killing her comrades by shooting him in the forehead. However, this would lead to an apocalyptic future; When Mystique shoots Trask in the head, this triggers the awakening of the sentinels, because of Trask being killed by a mutant and because of Mystique being experimented and tortured on for her DNA to complete the sentinels (eventually she died in the past future). The sentinels would then bring about an apocalyptic future once they begin targeting humans as well. For this reason Wolverine was sent back in time to prevent Trask's death.

Trask was denied funding for his Sentinel project. Mystique tried to kill Trask, but Wolverine, Charles, Hank, and Magneto stopped her. However, as a result of a battle from Magneto trying to kill Mystique, the people were horrified by the existence of mutants and Trask's sentinel program was approved; furthermore, Trask obtained Mystique's blood and used it to create the sentinels.

After saving President Nixon from being killed by Magneto, Mystique tried to kill Trask a second time, but Charles Xavier convinced her not to, averting the bad future. Because a mutant saved the president, the Sentinel Program was shut down, much to Trask's anger. Later on, according to a newspaper article, it is revealed that Trask was arrested for selling military secrets to foreign powers after his Sentinel program was shut down. He, according to a newspaper article, was sent to prison. 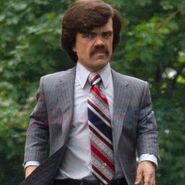 Add a photo to this gallery
Retrieved from "https://villains.fandom.com/wiki/Bolivar_Trask_(X-Men_Movies)?oldid=900798"
Community content is available under CC-BY-SA unless otherwise noted.