Bolster is an antagonist in Cornish folklore.

Bolster was a monstrous giant who terrorised the village now known as St. Agnes. He was so big that he could place one leg on St. Agnes Beacon and the other on Carn Brea, six miles away. He also enjoyed eating children, livestock and anybody else who crossed his path. His wife was regularly beaten by him, and was left with a hunchback when he forced her to carry rocks up the beacon so he could throw them at Cormoran, another famous Cornish giant. Many people tried to kill Bolster, but he defeated them all.

Bolster eventually met his end when he fell in love with the beautiful Saint Agnes. Agnes, wanting to be rid of the giant, told him to prove his love for her by filling a hole in the cliff with his blood. Bolster agreed and cut his arm. Unbeknownst to Bolster the hole was actually an old mineshaft leading out the side of the cliff, and so he could not fill it and bled to death while trying.

The legend is celebrated in St. Agnes on Bolster Day, the last Sunday before May Day, with a pantomime depicting the legend of Bolster. 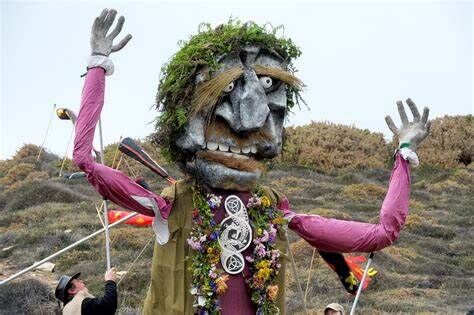