Boltmon is an outlaw Digimon who has lived in the wastelands and a minor villain in in the reboot of Digimon Adventure, and he is Rebellimon’s archenemy.

Boltmon is an Mega Level Digimon who uses an ax as his weapon, and his ax is effective in battle. He also has traits that also make him resemble Frankenstein.

Long ago when Boltmon, like other outlaw Digimon, lived in the wastelands, he challenged Rebellimon to battle and defeated him. Since then, Rebellimon has vowed to kill him at any cost. Years later, he attacked Rebellimon again, though Cutemon heard him coming. During the battle, Rebellimon did not want Taichi and Agumon to join the battle against him, and it was easily to defeat him. When Cutemon tried to defend Rebellimon, he did it only by to get easily blown away by his stomping on the ground, and would've been killed by him stomping on him had Rebellimon not saved him. During a hard fight, Cutemon uses his powers to heal Rebellimon's arm, and both Rebellimon and Cutemon were able to dodge Boltmon's attacks and Rebellimon was finally able to defeat Boltmon and win his revenge.

Boltmon in the middle of a fight.

Boltmon gets hit with his own ax 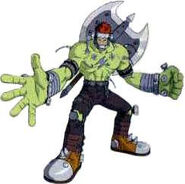 The ax returned to Boltmon’s hand like a boomerang