Bomamba, also known as Bomamba the Witch, is a second-level Nightmaren created by Wizeman and an antagonist in the video game NiGHTS: Journey of Dreams.

Bomamba is a typical old wicked witch who has green skin and big yellow eyes with cat-like pupils and a black cat's tail. She has a long-sleeved black dress with red bells and a purple collar, and a pointy dark purple hat. She has no legs, and instead balances on a gold top-like part. Her cat minions are black, balance on their tails, (due to a lack of a body) and eyes just like her.

Bomamba is the boss of Helen Cartwright's Crystal Castle dream as she was summoned by Reala under Wizeman's orders to do away with the former Nightmaren NiGHTS and to steal ideyas from more innocent Vistitors (dreamers) in the Night Dimension. Her arena is a typical witch's lair with stained glass windows featuring cat faces, an opening in the ceiling that reveals the moon and stars, and a gigantic bubbling cauldron down below her. A few bottles of what is most likely poison are also found lying around.

Bomamba's cats play a role in attacking the player and in defeating her. In the first fight, she creates a magic seal with rails and holes in it. The player moves the seal around to try to get the black cats into the holes. In the second fight, the rails are removed, and when all of the cats are gone, another seal and wave of cats appears, with the holes on top of little hills. Once she is beaten, the player gains the blue idea of intelligence, the rocket Persona, and access to Memory Forest. 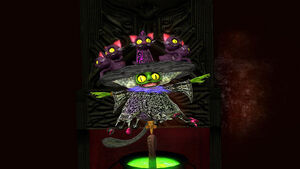 Bomamba appearing with heads of black cats on her hat. 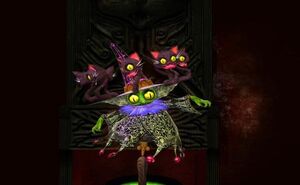 Bomamba the Witch
Add a photo to this gallery

Retrieved from "https://villains.fandom.com/wiki/Bomamba?oldid=3458740"
Community content is available under CC-BY-SA unless otherwise noted.