The Bomb Guy is a minor character in the top-down shooter video game Hotline Miami. He is a 50 Blessings operative who wears a tiger mask. He is unsuccessful in carrying out a massacre ordered by 50 Blessings and ends up, as his name suggests, rigged up with explosives and interrogated by his captors.

The Bomb Guy is a man wearing a tiger mask used for 50 Blessings' jobs, a dark green coat , a pair of jeans and a pair of green shoes. By the time he is encountered, he has had a grey, explosive vest strapped around him and rigged to two doors.

Nothing is known about the Bomb Guy's past. When 50 Blessings takes a stand against "Russian oppression" in America by using cryptic and threatening phone calls to coerce people into killing members of the Russian Mafia, the Bomb Guy is one of the many people in Miami who start receiving these phone calls. Implied to be experienced enough in combat for 50 Blessings to target him, the Bomb Guy complies with the messages left on his answering machine and tries to massacre a group of Russian mobsters occupying NW 24th Street. However, the Bomb Guy botches the hit and gets captured by the Russian Mafia. Looking to crack down on the mysterious killing sprees targeting their criminal organization, the Russian mobsters torture the Bomb Guy for information by having him tied to a chair and strapping explosives around his waist. The mobsters then rig the explosives to two doors in order to make sure that the Bomb Guy is unable to escape. However, the two mobsters failed to account for anyone, including more masked killers, to come into the room.

On May 5th, 1989, Jacket is sent to attack NW 24th Street, being informed by the callers on his answering machine that someone they sent (the Bomb Guy) failed to do a "good job". While the Bomb Guy struggles in his chair during interrogation, Jacket fights his way up to the second floor of the house. Realizing something is wrong with the doors, Jacket grabs a shotgun and blasts open one of the doors, triggering the Bomb Guy's explosive vest and blowing up the entire room, killing the Bomb Guy and his two captors instantly. Jacket quickly finishes off his hit and flees from the scene. Later on, Jacket collects a newspaper clipping reporting that the explosion was loud enough to be heard all across town. The remains of the Bomb Guy and the two Russian mobsters were said to have been recovered from the crime scene. 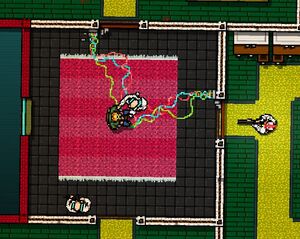 The Bomb Guy being interrogated by Russian mobsters while rigged up with explosives. 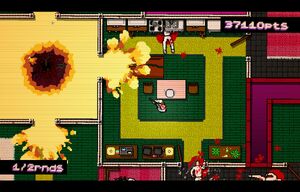 The Bomb Guy gets blown up when Jacket blasts open one of the doors with a shotgun. 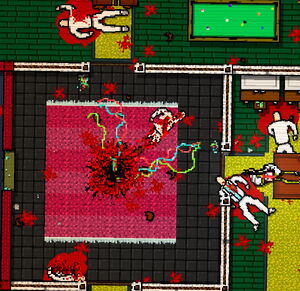 The gory remains of the Bomb Guy and his captors.