To steal as she pleases.

Wendy Conrad, also known as Bombshell, is a supervillain from Marvel Comics who specialises in two unique trades that she combines to devasating effect: juggling and explosives.

An expert juggler that specializes in explosives, Bombshell began her criminal career as a solo customed mercenary.

Her first recorded mission paired her up with Oddball and the Silencer: The three of them had been hired by Crossfire to kidnap superhero Hawkeye. Bombshell disguised as a nun to approach Hawkeye and his partner Mocking Bird, and then she attacked with her explosive gauntlets. Bombshell them harassed Mocking Bird with incendiary weapons while Oddball was taking care of Hawkeye. Although the heroes were more skilled, the villains managed to knock them down and took them to Crossfire's HQ at Cross Technologies.

Oddball was impressed by Bombshell's skill for the craft, and talked her into joining the Death-Throws, a team of criminal jugglers to which Oddball belonged. Hawkeye and Mocking Bird escaped from Crossfire's trap, destroyed his ultrasound machine and captured Crossfire. Oddball and Bombshell were defeated and would have been arrested too, but they were rescued by Tenpin, a member of the Death-Throws who was also Oddball's brother. Tenpin had been looking for his missing brother, and Oddball convinced him to back Bombshell's addition to the team. Death-Throw leader Ringleader welcomed Bombshell as the fifth member of the team.

Crossfire contacted the Death-Throws from jail. He wanted the jugglers to release him, and agreed to pay them when he was freed. The Ringleader accepted the deal, and Bombshell and the other Death-Throws worked together to free Crossfire. However, once they had taken Crossfire to their own HQ, they discovered that Crossfire was broke. His assets had been impounded and he had lost any useful link with Cross Technologies. The Death-Throws decided to use Crossfire as a bait to attract Hawkeye and Captain America to a trap, but those two Avengers defeated all of the Death-Throws. Bombshell and her partners went to jail.

Bombshell was then approached by Superia, a feminist zealot wanting to gather an all-women super-villain team: The Femizons. Bombshell became one of the several dozens of super-powered women who supported Superia's scheme to sterilize all the women in the world except for a few chosen ones, and then force the governments to accept their demands as the only way to ensure humanity's continuity. Along with the other Femizons, Bombshell travelled to Femizonia Island (South Atlantic) in the S.S. Superia.

However, two Femizons had a long-lasting outgoing feud that led them to conflict during the trip. Snapdragon attacked Diamondback and injured her. Diamondback's allies Captain America and Paladin tracked her disappearance and boarded the S.S. Superia. A third Femizon, Ferocia, raised the alarm and Bombshell attacked Cap and Paladin, as a part of a 50-women army.

Although they managed to defeat the males, Superia's scheme was a disaster when the protection of Femizonia Island was broken and Superia was forced to leave to stop her own sterilizing bombs. The Femizons were disbanded and each of them went her own path.

Bombshell re-joined the Death-Throws and recently fought Union Jack as a part of the team.

Bombshell is not only a great juggler, but also an expert in explosives, including creating, preparing or defusing any explosive object. 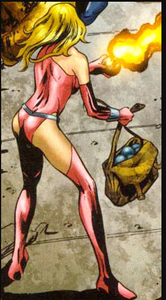 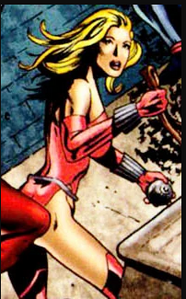 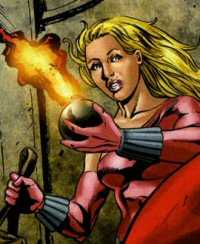 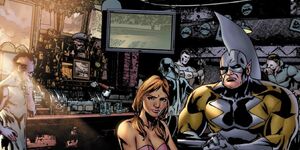 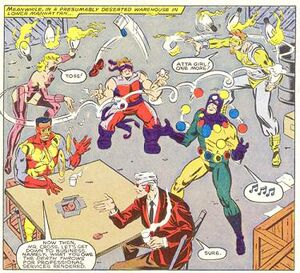 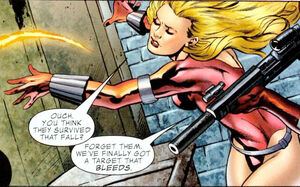