Bon Bon in his cookie spaceship has a weapon that can mutate vegetables. It is up to the Aveggies to stop him. The members are Captain Americauliflower, Onion Man, The Mighty Corn, Dr. Brownie (Cookie Monster), Black Bean Widow and Zuccini Eye. Dr. Brownie became hungry, so he became much bigger, green and his purple pants appeared. He ate the cookie spaceship of Bon Bon, so the day is saved.

Bon Bon is a parody of Ultron. He has chocolates as his armor instead of metal. It is unknown, whether he is a robot or not, since he is a muppet wearing a helmet.

Bon Bon wants to ruin vegetables and the reason is unknown. 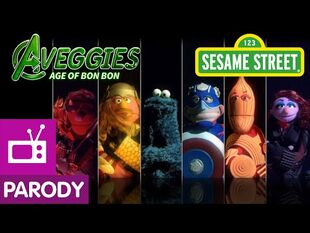 Retrieved from "https://villains.fandom.com/wiki/Bon_Bon?oldid=4279239"
Community content is available under CC-BY-SA unless otherwise noted.