Bonebreaker was the leader of the original Reavers, a gang of cyborgs living in a ghost town in Australia, who perpetrated robberies across the globe. Bonebreaker, as well as Pretty Boy and Skullbuster, avoided being sent through the Siege Perilous along with the other Reavers after being defeated by the X-Men.

Following their defeat, Bonebreaker sought out Donald Pierce and Lady Deathstrike to aid in rebuilding the Reavers and defeating the X-Men. At this point, Pierce took over Bonebreaker's role as the Reavers leader. The Reavers never ended up battling the X-Men but encountered Wolverine, beat him half to death, and crucified him.

After Wolverine escaped, the Reavers attacked Muir Island where they battled the Muir Island X-Men and Freedom Force, killing Sunder, Stonewall, and Destiny before being defeated. After the Muir island massacre, Bonebreaker and the other Reavers continued to attack various heroes and mutants such as Wolverine, Emma Frost's factories, Rogue, and the Punisher. When Pierce was creating Albert and Elsie-Dee as a trap for Wolverine, Bonebreaker accidentally gave Elsie-Dee the maximum artificial intelligence instead of that of a 5 year old. As a result Elsie-Dee and Albert decided that Wolverine was a noble person and foiled Pierce's plans.

As part of the Upstarts' competition, Trevor Fitzroy sent his Sentinel to attack Pierce and the Reavers. The Sentinels arrived in Australia and quickly dispatched the Reavers.

Bonebreaker was among the other Reavers reassembled by Pierce and the Shadow King, who attacked the X-treme X-Men. After being defeated again, the Reavers were handed over to the police.

Bonebreaker is a member of the cyborg mercenaries called the Reavers. They searched for an ancient alien craft that supposedly held limitless power. They located it within the Morlock Tunnels but were unable to breach the hull. After capturing the Morlocks they came to the conclusion that only adamantium could open it. They led the X-Man Wolverine down to the sewers and tricked him into cutting a hole in the ship, releasing the entity called the Spirit Drinker. They soon relised their mistake discovering that the being was trapped in the ship eons ago by the Shi'ar and banished to Earth. The Spirit Drinker absorbed all of the Reavers except Deathstrike who managed to escape. It absorbed a few X-Men and Morlocks before it was eventually destroyed by the X-Men. Their life-forces were returned to them.

Bonebreaker, along with other Reavers, appeared through Spiral's portal to hostage a ship carrying a number of mutants that were heading to Genosha. Nightcrawler and his team of mutants were able to defeat them though. 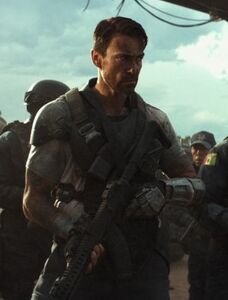 Bonebreaker as he appears in Logan 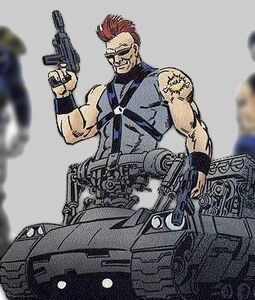