Leader and master of the Skellobits

Kill Mario and his friends.

Steal the Pure Heart and use its power to rule all.

Bonechill is the main antagonist of Chapter 7 in the video game Super Paper Mario.

Bonechill is a gigantic blue semi-skeletal dragon with six gray feathered wings (resembling the wings of the Nimbi species) and a dark goldenrod-colored cannon for a lower limb and a black spiral tail, who commands the cold, and was after a Pure Heart in the Overthere (the Super Mario Bros. universe's equivalent for Heaven alongside the realm's benevolent inhabitants/dead good souls called Nimbis representing angels).

Bonechill was a former Nimbi who was once held below the Underwhere (the Super Mario Bros. universe's equivalent for Hell or the underworld), but was released by an earthquake, and entered the Overthere with several demons called Skellobits (the dead who were evil in life and sent to suffer among the game-overed). He attacked Grambi, King of the Overthere, before Mario, Peach, Bowser, and Luigi arrived to stop him. Bonechill revealed to Luvbi, Grambi's daughter who was traveling with Mario, that she was the eighth and final Pure Heart, turned into a Nimbi (angel) by Grambi and Jaydes (Queen of the Underwhere) to hide it from evil entities like him. Mario, Peach, Bowser, and Luigi fought Bonechill and defeated him. Bonechill was destroyed, shattering to bits.

Bonechill has 80 HP. He can breathe ice to freeze Mario and his allies, and make icicles fall from the ceiling. He also shoots icelike missiles from his cannon. To defeat him, the player must grab the icicles or missiles using Thoreau, and throw them at his head. Alternately, Luigi's Super Jump can be used to defeat him. 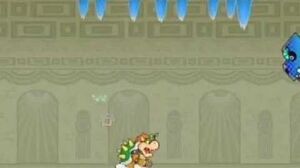