Eating children in as slow and sadistic way as possible.

The Bonecruncher, also known as the "Bonecrunching Giant", is a disgusting Giant and one of the 9 Giants that torment the BFG in the Giant Country in the book The BFG by Roald Dahl.

The Bonecruncher makes an appearance in the book when he clusters round the BFG with his band of Giants, mocking and laughing at the poor giant. The Bonecruncher accuses him of sheltering a human (Sophie) in his cave, but the BFG bravely says this is a lie.

Once the Giants get bored, the Bonecruncher is one that tosses the BFG around like a tennis ball.

Later in the book, the BFG extracts petty vengeance by blowing a nightmare into Fleshlumpeater's nose, and this causes the terrifying Giant leader to start a fight with the others, including the Bonecruncher.

When the Giants recover and gallop off to England to eat humans, Sophie inspires the BFG to stop this evil and recruits the Queen of England and her soldiers to catch the Giants. The Bonecruncher is taken by surprise in the middle of a pleasant dream about eating humans, and he yells that he is "swogswalloped" upon being flown back to England.

Along with the other eight Giants the Bonecruncher is imprisoned in a gigantic pit and made to eat Snozzcumbers as punishment for his heinous crimes. 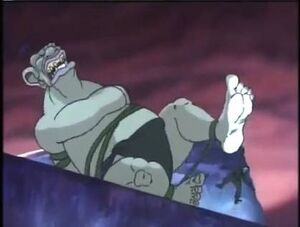