Hiding in the shadows

Escape the Bottom of the Well (succeeded).

Bongo Bongo is a major antagonist in The Legend of Zelda: Ocarina of Time, fought as the boss in the deepest part of the Shadow Temple. It appears as a gray, withered body with a large eye instead of ahead. Its hands are severed from his arms. Nevertheless, it is able to move them around as if they were still a part of him.

When fighting Bongo Bongo, the battle takes place on a platform, very similar to a giant drum. During the duration of the battle, when not trying to slap, crush, grab, or punch you around, he will beat on the "drum", and sing a mysterious song of some sort.

Bongo Bongo is a phantom shadow beast sealed in the well by Impa, but became so powerful (possibly with help from Ganondorf, who may or may not have raised him in this form) that he escaped. In the form of dark blue static shadow, Bongo Bongo attacked Link and Sheik in Kakariko Village and entered the Shadow Temple. Later, Link fought Bongo Bongo on a giant drum in the murkiest area of the Shadow Temple and destroyed him by repeatedly attacking his eye.

An elderly person in Kakariko Village (located near the Spider House) tells of how a man had the ability to see the truth, and his house was where the well is today (in the future). This could mean that Bongo Bongo was once a person, as he manifests himself as having one great red eye, and the Lens of Truth is needed to see him. In addition, his eye bears a strong resemblance to the Lens of Truth.

It is unknown whether he was once a living person or not. If he was, it is possible that he was executed for murder. Both the Shadow Temple and the Bottom of the Well are filled with undead and have various torture devices. Bongo Bongo may have been a powerful Sheikah (as the Lens of Truth, which is related to the Sheikah, is in his house, and he inhabits the Shadow Temple) who went mad and killed several people. The Sheikah then executed him and put the tear on the Sheikah symbol. 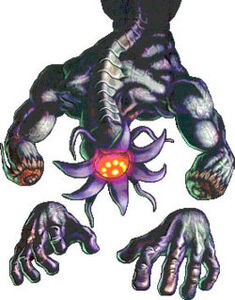