Steal treasures from Diggers and ruins in order to live thewealthy high life.

The Bonne Family is a group of sky pirates from the Megaman Legends series. They are a family who live on stealing and pillaging, while exploring ruins after treasure. They have a vast arsenal of war machines under their disposal, while also having an army of Servbots who are their loyal servants. They travel around the world on the Geeselschaft, a huge blimp which is heavily armored.

The Servbots are an army of small, Lego-like robots who serve the Bonne Family in Megaman Legends. They were all created by Tron Bonne, whom they worship and always address as 'Miss Tron'. There are 41 Servbots, each one with a unique personality and skills. They do almost everything for the Bonnes, serving as support on their missions while also piloting their own robots, as well as doing housework on the Gesellschaft, such as cleaning and cooking. Though they work for a group of pirates, they are generally well-intentioned and are not inherently evil as they do not give any further thought to their actions beyond pleasing Tron. 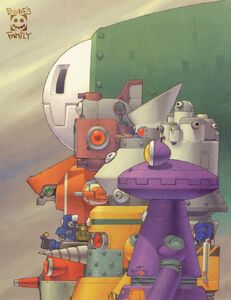 Mechas belong to Bonne Family.
Add a photo to this gallery 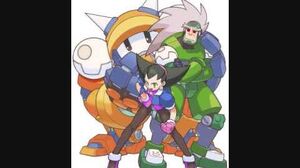 Retrieved from "https://villains.fandom.com/wiki/Bonne_Family?oldid=4185102"
Community content is available under CC-BY-SA unless otherwise noted.