Osgood
Zygella (by the Doctor)

Find The Osgood Box and start a Zygon/Human war (formerly).

In the form of Clara Oswald she was portrayed by Jenna Coleman who also played Beattie in Inside No. 9.

Bonnie is a Zygon Commander who led a group of rogue Zygons and planned to find The Osgood Box and use it to unmask the other Zygons living on Earth that were disguised as humans and start a war and end the Zygon/Human ceasefire. She took on the form of Clara Oswald and pretended to be her and lured Jac and a group of UNIT soldiers to the pods were Zygons kept the humans they posed as (one of which contained Clara) before ordering her fellow Zygons to kill them when they realized that she wasn't Clara. After this, Bonnie went to UNIT and took a bazooka and fired it at the plane The Twelfth Doctor and Osgood were in.

However, Clara was able to make Bonnie miss first time but the second time, Bonnie managed to shoot down the plane, but the Doctor and Osgood survived by parachute. She later tracked down a peaceful disguised Zygon and forced him to return to his true form before going back to UNIT and took out a laptop which had a video of Osgood and her Zygon duplicate who been made before one of them was killed by Missy, but found to her anger that the video did not reveal the location of The Osgood Box. Bonnie then went to the pod Clara was in and forced her to reveal the location of The Osgood Box which was UNIT HQ and in The Black Archive.

When arriving there, Bonnie found that there were two Osgood Boxes (a blue one  and a red one) and was contacted by Kate Stewart and forced the Doctor to tell her which box was the right one and threatens to have two other Zygons kill Clara, to which the Doctor said was the blue one. However, when Bonnie opened the box, it had two buttons in it, one that said True and the other Consequences and this was the same for the other box. Bonnie then demand that the Doctor be brought to her by the Zygons disguised as soldiers that were with the Doctor, Osgood and Kate, however they were shot dead by Kate.

The Doctor, Osgood and Kate then arrive at The Black Archive were the Doctor is able to convince Bonnie not to go through with her plan and she learns that both boxes are empty with just buttons. After this, Bonnie contacted the other Zygons and told them that able the ceasefire was still on. Following this, Bonnie took on the form of Osgood and along with the other Osgood became a defender of Earth.

Bonnie's true Zygon form was played by Aiden Cook whilst her human forms were played by Jenna Coleman (who plays Clara Oswald) and Ingrid Oliver (who plays Osgood). 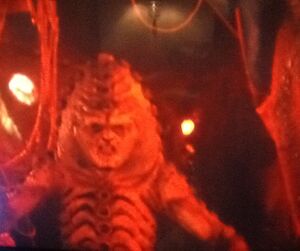 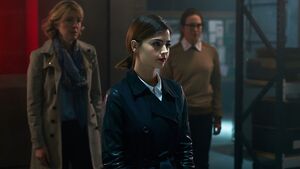