Have Anna birth the Blessed.

Bonnie Harless is the main antagonist in the Mafia III DLC, Mafia III: Sign of the Times. She is the leader of the Ensanglante, a religious cult descended from white supremacists. She intends on starting a race war with the African-American citizens of New Bordeaux, and have the cult's entity, Pere Sanglant come by birthing "The Blessed".

She was voiced by Janna Bossier.

Bonnie is a descendant of Braxton Harless, a Confederate General who prophesied that The Blessed would be born into his bloodline after an encounter with Pere Sanglant. Even when she was a little girl, Bonnie dreamed of honoring her family's name by birthing the Blessed, and later became the leader of the Ensanglante.

As the cult's leader, she used Nuit Blanche, an invitation only club in Downtown New Bordeaux, and used the club to recruit new members into the cult. Bonnie used her charisma, manipulation and drugs referred to as "Sky" to recruit young girls into the cult, and later have them indoctrinated in a ceremonial room. Additionally, Bonnie and the cult planned on starting a race war with African-Americans in New Bordeaux, whom are referred to as the "filth".

Despite her efforts to birth the Blessed, she later realized that Pere Sanglant had chosen a different path for her. She sought out Anna McGee, the last known descendant in the Harless bloodline and her distant relative, so she could carry the Blessed. Bonnie met with Anna, and through manipulation, convinced her to take part of the consummation ritual. There, she was impregnated by the High Priest at the New Bordeaux Opera House, and it was filmed there as well.

Horrified by her actions with the cult, Anna fled from the cult while preforming a cleansing ceremony at the ruins of Sammy's Bar. She ran into Lincoln Clay and Father James, whom protected her from cult members. Lincoln managed to piece together the clues on what happened, and learned the truth behind the cult and their intentions. While investigating the cult, Anna committed suicide out of fear and guilt of her actions.

After Anna's death, Lincoln pursues Bonnie to the cult's home at the Sacriste Sanatorium, where he kills the remaining members. After a brief struggle, Lincoln informs Bonnie that Anna killed herself, which enrages her. Bonnie proclaims that Anna was chosen, and attempts to kill Lincoln with a ceremonial knife. She accidently falls on the knife that plunges into her stomach, and as she dies, tells Lincoln that New Bordeaux will burn. 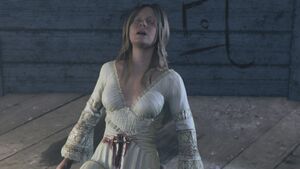