Protect His granddaughter, Valerie (Succeeded, but then failed).

Bonzo is one of the secondary antagonists in the 2010 movie Klown Kamp Massacre, the other being Vinnie The Clown. He is the Grandfather to Valerie and the Father of Valerie's Father. He was portrayed by Mike Miller, who also played the racist vendor at the fair who was shot by Django in A Million Ways To Die In The West during the after-credits scene.

Nothing is known about Bonzo's childhood, not even what his real name was, however at some point he became a world-famous clown that opened up his own clown training school which he named Bonzo's Ranch, teaching thousands of people he inspired into official clowns. One day, when his son drunkenly walked into Valerie's room with intentions to rape and/or abuse her like he had many times before, she pulled out a gun she had hidden under her blanket and shot him in the chest, killing him. Bonzo rushed inside of the room, shocked at what she had done, but still willing to protect her and his own image by framing a worker that couldn't speak English at the camp for his son's murder after bribing the judge and lying to a reporter.

It's not known if Bonzo was even at the camp during the first massacre committed by Edwin The Clown since he didn't appear in any of the flashbacks, but most likely not seeing how he was still alive afterwords.

15 years after the original massacre had mostly faded from memory, to boost his popularity again, he re-opened clown camp, much to Edwin The Clown's anger. After Edwin had murdered the two teachers at the camp that were in his way, he snuck inside Bonzo's bathroom while he was taking some medications and surprised him once Bonzo saw him in the mirror, then strangled Bonzo with a noose until his neck snapped, then hung Bonzo inside his bathroom to make it look like a suicide.

Later, once everyone at the camp except for Valerie was dead and Edwin was readying his act, Bonzo's phone began to ring just like someone else's phone rang that ruined his performance back in 1991. Enraged, Edwin took his mic stand and smashed Bonzo's skull with it right in front of Valerie.

Being a celebrity clown, Bonzo almost always kept the appearance of a jolly old clown that was pure of heart and he genuinely wanted to teach others to become great clowns like himself. He held high hopes for any student that came to his camp to learn.

However, he was also shown to be entirely willing to cover up a murder as to not ruin his reputation and not really caring that Valerie murdered his son. To be fair though, Valerie's Father he was shown to be very physically and sexually abusive to Valerie, so it was possible that's why he didn't care about his death. 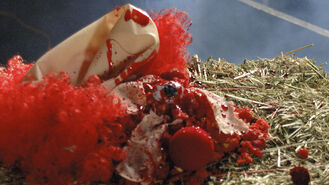 Bonzo's head after being smashed with a mic stand by Edwin The Clown. 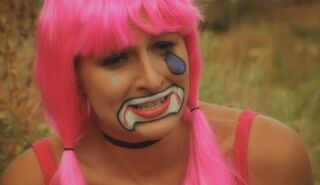 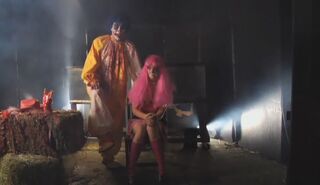 Valerie after being kidnapped by Edwin The Clown
Add a photo to this gallery
Retrieved from "https://villains.fandom.com/wiki/Bonzo?oldid=3385779"
Community content is available under CC-BY-SA unless otherwise noted.