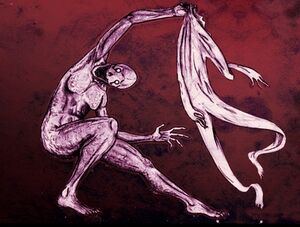 A Boo Hag is a mythical creature in the folklore of South Carolina's Gullah culture. It is a regionalized version of the Hag myth.

According to the legend, Boo Hags are similar to vampires. Unlike vampires, they gain sustenance from a person's breath, as opposed to their blood, by riding their victims.

They have no skin, and thus are red. In order to be less conspicuous, they will steal a victim's skin and use it for as long as it holds out, wearing it as one might wear clothing. They will remove and hide this skin before going riding.

When a hag determines a victim is suitable for riding, the hag will generally gain access to the home through a small crack, crevice, or hole. The hag will then position themselves over the sleeping victim, sucking their breath. This act renders the victim helpless, and induces a deep dream-filled sleep. The hag tends to leave the victim alive, so as to use them again for their energy. However, if the victim struggles, the hag may take their skin, leaving the victim to suffer. After taking the victim's energy, the hag flies off, as they must be in their skin by dawn or be forever trapped without skin. When the victim awakes, they may feel short of breath, but generally the victim only feels tired.

An expression sometimes used in South Carolina is "don't let de hag ride ya." This expression may come from the Boo Hag legend.

It was also said that if a person placed a broom beside their bed before going to sleep it would prevent the Hag from riding them. Hags supposedly would be distracted by counting the straws of the broom and would not get to ride the person sleeping before the sun rose the next morning.

(like all "night spirits" (Mora, Nightmares, Night Hags etc( the Boo Hags are now known to be the result of the medical condition known as "Sleep Paralysis")

Retrieved from "https://villains.fandom.com/wiki/Boo_Hag?oldid=3484630"
Community content is available under CC-BY-SA unless otherwise noted.