Running his casino in Octagonia.

Make Jade fall in love with him (succeeds with the Hare-Raising Suit).

Work every monster in his casino to death.
Kill the Luminary (all failed and Jade is free from the Hare-Raising Suit's magic).

Booga is a minor antagonist in Dragon Quest XI. He is the master of the casino in Octagonia.

He is voiced by Yuichi Nakamura in the Japanese version, and Timothy Watson in the English version. Timothy is the well-known voice of Mumkhar/Metal Face from the Xenoblade series, as well as voicing fellow Spectral Sentinel Tyriant, and fellow Mordegon lackey Jarvis.

After the fall of Yggdrasil, Booga is given the Green Orb from his master, Mordegon. He than goes to Octagonia, which is originally an arena and turns it into his very own casino. He also enslaves all of its inhabitants, having them to work on said casino.

Jade soon goes to Octagonia and attempts to stop Booga. However, as soon as Booga sees Jade, he is attracted to her and  wants her as his girlfriend, despite already having a girlfriend in Boodica. He wants her to put on the Hare-raising suit, threating the citizens with 2 War Gryphons if she doesn't. After she puts on the suit, Booga has his girlfriend send the citizens into Limboo so he can be alone. Jade saves a citizen from being sucked in, however, she herself is sucked in, much to the Hooper's dismay. When Boodica is beaten, Booga is thrilled that Jade has returned unharmed, and happy that the suit worked its magic right on time. Jade is then Booga's new girlfriend and personal callgirl.

Soon, the Luminary and his party arrived Octagonia. They are shocked to find out that it has turned into a casino and all residents have become monsters. They then meet a Drackmage, who tells them that if they give it a love potion, it will allow them to go to the VIP area. They soon get one and make it to the VIP suite, where they meet Jinxed Jade. Although Hendrik and Rab tried to reason with her, Jade still refused and attacks them. However, she is eventually knocked out, much to Booga's anger and displeasure, deciding to kill the Luminary for that. However, Booga is defeated and his magic starts to weaken, causing Jade and the residents to return to normal. Jade soon remembered what Booga has done to her, and eventually pours all of her rage on the perverted Spectral Sentinel, thus violently killing Booga.

Booga is a green, fat, wingless demon. He has a furry tail and has the Green Orb as a necklace.

Unlike other Spectral Sentinels, Booga is not blood-thirsty. He is even shown to be annoyed about fighting people that wanted to stop him, however he will still fight if he is very furious, but relents when he sees Jade for the first time. Instead, Booga is absurd, as he turns Octagonia into his casino instead of cursing or destroying it. However, he is very perverted, seeing Jade as a perfect new girlfriend, having "Hair as glossy as a Great Sabrecat's coat and the flawlessly toned physique of a Gigantes". 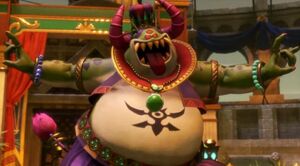 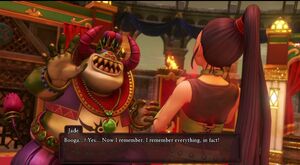 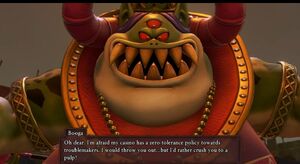 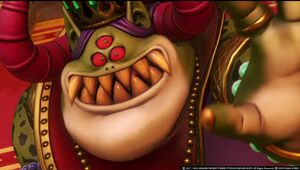 Booga's moment before getting killed by Jade.
Add a photo to this gallery

Retrieved from "https://villains.fandom.com/wiki/Booga?oldid=4096665"
Community content is available under CC-BY-SA unless otherwise noted.