Eating things they come across

Trying to take over planets (possibly)

To take over Earth (failed)

The Boogersnatchers are an armada of slimy, disgusting aliens that possess people's bodies by crawling up their noses and taking over their brains. They appeared as the main antagonists in the Total Dramarama episode, "Invasion of the Boogersnatchers".

In the episode "Invasion of the Boogersnatchers", an alien U.F.O. landed in the parking lot of Total Drama Daycare and out came a slimy bug-sized alien, who snuck into the building.

Chef was preparing for picture day, by setting up his camera, when the boogersnatcher crawled up on top of his camera and mechanically enhanced it, turning it into a weapon. When Chef noticed it, he tried to get it off of there, but the alien jumped off the camera and went up his nose. The boogersnatcher was able to possess Chef's body and was able to control it even talk through it.

Harold warned Beth and Izzy about the boogersnatchers and compared them to a comic book about this very alien species. Beth and Izzy disbelieved this and laughed at him for this.

Chef called Harold into the picture room and Harold clothespinned his nose to avoid getting possessed. Chef yanked the clothespin off and placed a space helmet on him. Harold thought this was a protective shield before he noticed that there was a boogersnatcher inside of his helmet. Harold flipped out and before the boogersnatcher could possess him, he tossed the helmet off and it landed by Beth and Izzy. Beth and Izzy saw the boogersnatcher and freaked out, tossing the helmet again, landing it by Cody, who promptly got himself possessed. Beth and Izzy finally started believing Harold and agreed to do whatever it would take to get rid of the hostile alien species before it was too late.

Harold and Izzy needed to blend in with the boogersnatchers by sticking green beans up their noses and pretending to be possessed. They noticed that Beth was possessed for real and Harold sprayed her with hairspray, causing Beth to sneeze the boogersnatcher out. Izzy stomped on the boogersnatcher, until it was flattened on the ground and a bird came by and ate it.

Harold got the idea to lure all of the the possessed people out into the playground, where a flock of birds attacked them and pulled the boogersnatchers out of their noses to eat them, freeing everybody up again.

The original boogersnatcher fled to his U.F.O. to retreat, only to find that his U.F.O. had been towed.

In the final scene of the episode, everything was back to normal again and Chef was ready to take a picture of the entire class for real. In the middle of taking the picture, they realized that Cody had not yet been vanquished of his boogersnatcher as it came out of it's nose to scare everyone, just as the official yearbook picture was taken. 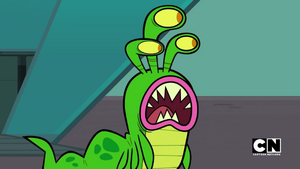 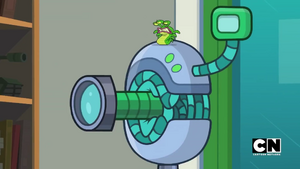 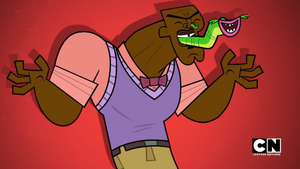 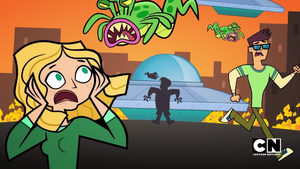 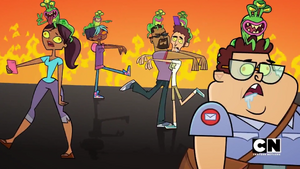 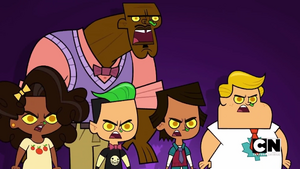 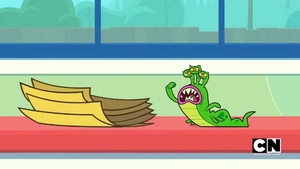 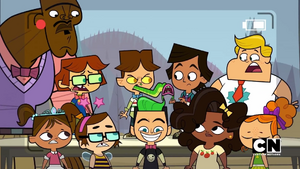 Retrieved from "https://villains.fandom.com/wiki/Boogersnatchers?oldid=3809536"
Community content is available under CC-BY-SA unless otherwise noted.