Scaring, or at least trying to scare children.

Get revenge on Grim by stealing both his powers and job (failed).

He was voiced by the late Fred Willard.

An old arch-enemy of Grim's since junior high school who was the worst school bully, Boogey played pranks on other classmates including Grim and make them look like idiots throughout his school career. Boogey is, in fact, the Boogeyman himself, and can shapeshift in order to scare people. Boogey is Grim's rival in scaring people, but usually fails in doing so. Being constantly frustrated by his inability to scare modern-day children (he blames cartoons, video games and for some reason, the tuba), Boogey visits Grim in the episode Bully Boogie. Mandy suggests a challenge of a scaring contest, which Boogey promptly loses, and is banished to the Pit of Terror/Nightmare Realm. Ironically, it is the same dimension to which he sent Billy, one filled with spiny plants and a creature similar to the plants.

The Boogey Man is prominently featured as the main villain in the television movie Billy & Mandy's Big Boogey Adventure where he testified against Grim in front of the Underworld Court. After getting his old nemesis fired from his position as reaper, he volunteers to take Grim and his accomplices out for a sail with his pirate crew in order to dispose of the former reaper. Boogey also revealed his plan to claim a very powerful artifact known as Horror's Hand, so as to make children fear him again. In the end, he discovers that he is not scary at all and becomes afraid of everything himself. He has not been seen since, due to his newly developed panphobia. it is unknown if Boogey survived or not.

The Boogey Man later appears in the flashbacks of Billy & Mandy: Wrath of the Spider Queen He attempts to cheat in the Grim Reaper election by stuffing the ballot box, but Grim catches him and tries to undo what he's done. Velma Green the Spider Queen then finds Grim with the ballot box, assumes that he is trying to cheat and runs away in tears. Angry at Boogey, Grim grabs the scythe and attacks him in a horrifying display. This prompts everyone else in the school that hadn't already voted to support Grim, meaning that Boogey was inadvertently responsible for him becoming the Grim Reaper. 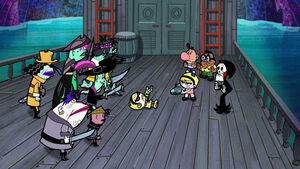 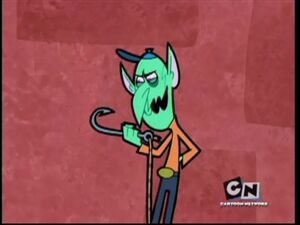 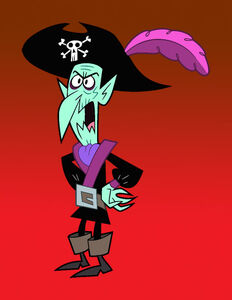 Retrieved from "https://villains.fandom.com/wiki/Boogey_Man_(The_Grim_Adventures_of_Billy_%26_Mandy)?oldid=4225300"
Community content is available under CC-BY-SA unless otherwise noted.