Tormenting children.
Lurking in the shadows.
Feeding on his victims' fears.

Make the world believe in him and kill anyone who says he does not exist.

Sadistic Bogeyman
The Boogeyman is the titular main antagonist of the Boogeyman movie trilogy. He is a sadistic demon who lives in closets worldwide, which are revealed to be portals to his dark and secret dimension.

The origins of the Boogeyman are unknown, either he was a human who became a monster or was a primordial demon which took to living in the dimensional space remains unclear.

The Boogeyman had a hobby of abducting children and killing their parents. Before the film, he drove a doctor insane, haunting him and his daughter, whom he eventually killed. The doctor had written graffiti over his lab, such as "Face him" and "Monster". The Boogeyman was a monster which had abducted children throughout history. He taunted Tim Jensin, a young boy, many times in his childhood and finally one night when he disguised himself as a levitating dressing gown, he killed Tim's father, by violently seizing him from behind and dragging him into the closet, where he bashed him around for awhile before pulling him into his world.

The Boogeyman haunted Tim Jensin, a young man in New York, threatened to destroy his relationship with his girlfriend. But when Tim's mother died in the hospital, the Boogeyman was threatening children in the ward, Tim ran in and saw the monster in the attic. Later, the Boogeyman returned to Tim's old family home where Tim was trying to prove himself the Boogeyman was never real. He saw memories from his traumatic childhood of the Boogeyman and then the Boogeyman killed his uncle when he came home. The Boogeyman dragged Tim's uncle into the closet after wrapping him up in plastic. Then, Tim and his childhood friend Kate confronted the beast by facing him. Tim had met a young girl named Fay who wanted him to face the Boogeyman by counting to six instead of five, she was revealed to be the ghost of the doctor's daughter. Then, Tim and Kate confronted the creature as it took on the forms of things Tim was frightened of as a kid, but he banished the Boogeyman into its dark dimension and trapped it there.

The Boogeyman returned and killed the father of Laura and Henry Porter, along with his wife. The Boogeyman was the creation of "Boogeyphobia" which is a psychological illness involving fear of the said folkloric monster. The Boogeyman returned to Henry when Dr. Allen, a psychiatrist, locked Henry in the closet saying the only way to defeat your fear is to face it, but Henry ended up possessed by the Boogeyman when it possessed him and forced him to kill all the teenagers in the hospital. Henry ended up having to face and kill his own sister but she escaped, and Henry blamed her for the deaths, causing her to be arrested, but Henry took off the mask and escaped, and was presumably exorcized by the Boogeyman soon afterwards.

The monster attacked Dr. Allen's daughter, killing her dog and dragging her under her bed, but she survived and ended up in her university, along with Sarah and her room mates. The Boogeyman later killed Allen's daughter by strangling her; Sarah came in and saw the monster but was unsure what he was. The Boogeyman returned to haunt the students. Despite Sarah trying to prove that he does not exist, he actually got stronger because the teenagers believed so much in him and were so scared that he was real. He killed one of Sarah's friends in the air shafts when she was trying to prove he was real to her teacher, who claimed "a legend is a legend, not a living breathing entity." But later the professor was killed by the Boogeyman and the monster took his body to his world. Later, Sarah's own boyfriend was killed violently by the monster when he dragged him into the closet. Sarah had seen a premonition of the Boogeyman's rise to power in the university and tried to evacuate it but the police came. She confessed, knowing this may stop the Boogeyman. But when the police were taking her into the elevator, doubting her ability to kill, the Boogeyman stopped the device, and dragged a screaming Sarah up to the roof of the elevator shaft and killed her.

Later, the Boogeyman was revealed to be growing in power, having complete mastery of the university, as he dragged a girl under her bed to his dimension when she expressed belief in him.

The Boogeyman was a cruel, sadistic, evil monster, possibly a shape shifter, as he looked different in each incarnation. His first appearance was a hideous goblin-like creature, then a deformed, corpse-like fiend with long hair, and then a gruesomely pale, knobbly human-like abomination with long black hair. In all his appearance, he looked corpse-like and emaciated. He liked wearing long black hooded robes, and when possessing Henry Porter, caused the man to wear a mask which resembled the monster's face. He had a cruel laugh, showing off his bloodthirsty side. He was also slightly perverted; he spied on Tim Jensin's girlfriend when she was having a shower; and he grabbed Sarah's bottom when she was trying to escape.

He was also good at human psychology; rather than appear in the dark and confront Sarah, he appeared when she least expected it - when she had turned the lights back on. 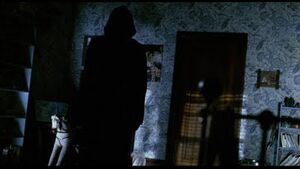 The Boogeyman comes towards Tim Jenkins. 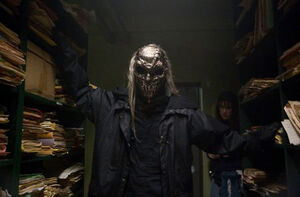 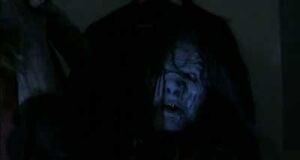 The Boogeyman in the third film 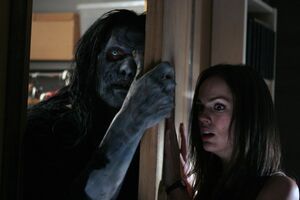 The Boogeyman fights with Sarah.