Catch (and possibly kill) the baby and the puppy (failed)

The Boogeymen are the main antagonists of Disney's 1933 Silly Symphonies short "Lullaby Land". They are a race of green creatures that inhabit the Forbidden Garden.

Their voices were provided by The Three Rhythm Kings.

A baby goes to sleep and enters the dream world of Lullaby Land with his stuffed puppy. The two of them wander around and eventually venture into the Forbidden Garden, which is filled with sharp objects and other things that are dangerous to children. After the baby lights three matches, they come alive and chase after the baby and the puppy. The two of them escape on a bar of smoke, leading to the matches being extinguished in a basin. The smoke from the matches materialises into the Boogeymen, who laugh evilly and begin chasing the baby after changing shape several times. Eventually, the benevolent Sandman appears and the Boogeymen disappear away. 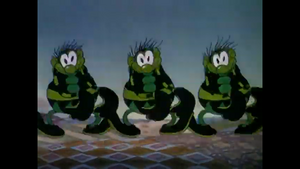 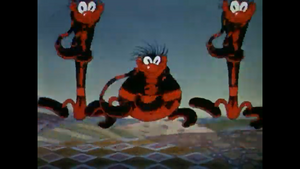 The Boogeymen after changing shape the first time. 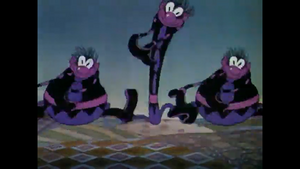 The Boogeymen after changing shape the second time. 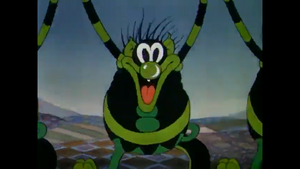