Monster
The Book Gamma is a supporting antagonist in Kamen Rider Ghost.

He is voiced by Kiyohito Yoshikai.

The Book Gamma achieved evolution by fusing with a book. It was sent by Chikara Saionji and Alain to claim the power of the Nobunaga Eyecon. To accomplish this, the Book Gamma had a Gamma Assault possess the secretary of the CEO of the Sengoku Corporation, and use her to manipulate the CEO into conducting a series of hostile takeovers of other businesses. The Gamma Assault convinced the CEO that by doing so he would be just like Nobunaga, whom he idolized and whom his family had served in the past. However, Takeru and his friends caught onto the scheme and purged the Gamma Assault from the secretary's body, before Takeru himself destroyed the Book Gamma using the Nobunaga Damashii.

The Book Gamma was later brought back by Igor alongside the Denki Gamma to assist him in his scheme to use a Dream World to gather souls. When Takeru and his friends entered the dream world, Denki Gamma and Book Gamma appeared alongside two Gamma Superiors to confront them. The two Gamma were able to force Takeru out of his Rider form and kidnap Yuichi Katagiri before fleeing. The two Gamma were later defeated by Ghost Mugen Damashii before Takeru and his friends canceled the Dream World. The Denki and Book Gamma then appeared in the real world to face the Riders again, but were defeated by Kamen Riders Necrom and Deep Specter with a combined punch. 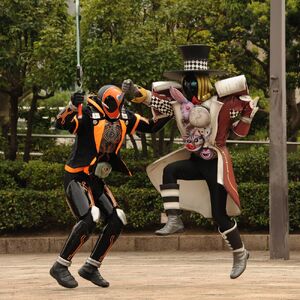 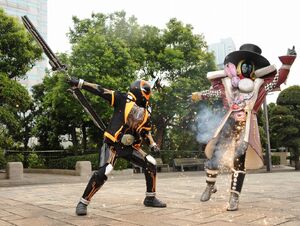 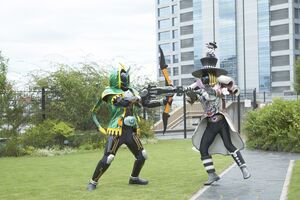