Save a Tree, Burn a Book

Before or during the events of Postal 2

None known (presumably any)

The Book Protestors are minor antagonists from Postal 2. They are a bunch of violent, trigger-happy ecologists who wish to burn every book existing in order to save the trees from destruction, even though they kill several innocents in the process.

The book protesters believe that making books is one of the main causes of deforestation. Therefore, they have the intent to destroy every book existing and to stop the production of books.

They are excessively ruthless, violent, and destructive, to the point of causing an arson in the library, where several innocents were caught in the fire and burnt alive. They are also against all forms of literature, bringing pocket signs such as "Make the library into an airport so I can get out of here", "Ignorance is bliss", "End literacy", "Knowledge is for commies", "Think before you read" or "ACHTUNG! Hitler wrote a Book".

They do not seem aware that by burning books, more trees must be cut down to replace the burnt books. In addition, some book protesters can be seen asking for signatures on Gary Coleman's book, this might be a bug in what NPCs can get signatures or intended as a sign of the group's hypocrisy.

They are the second of the hate groups to appear, making their first strike on Tuesday, though several members are seen since Monday without attacking the Postal Dude.

When they strike, the protagonist must get past every protester and escape the library. While the protesters are easy to defeat due to their lack of weaponry, the player must be careful to avoid the fire while escaping the building, as they committed a huge arson during their assault. 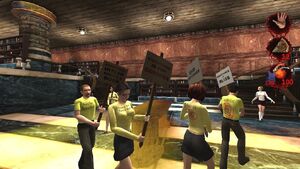