Skilled use of his hammer Extreme strength
Extreme endurance

Kill Sick Simon and manipulate the Real Simon to suicide (succeeded in the bad endings; failed in the true ending).

Book Simon is one of the two main antagonists (alongside Doctor Purnell) and the true final boss of the 2012 survival horror video game Cry of Fear. He is overall the true manifestation of the real Simon Henriksson's mental demons, whose goal is to kill his depressive but good counterpart: Sick Simon so that he can succeed in manipulating the actual Simon by committing suicide.

Book Simon is a silent, twisted, bloodied and battered form of the actual Simon that wields a Glock 19, then with a Remington 870, and then with an MP9 to attack the player, constantly fleeing when sustaining enough damage.

He was born from the real Simon's mental trauma and Cognitive Therapy via writing a book under Doctor Purnell's instructions, following a hit and run accident event known as The Black Day that drove him to becoming reclusive, and thus intends to kill Sick Simon within the hellish nightmare filled with giant wounded hands, large spamming eyes, and bloody narrowed alleyways so that he can manipulatively make the real Simon to goal him to committing suicide.

Book Simon is gunned down for good in a dark alley wielding a flare and sledgehammer in an attempt to charge in by surprise, and once he is killed the nightmare finally ends. However, it is not Book Simon who was killed, but rather the two police officers that attempted to stop him from committing suicide. He was then testified by the doctors of having a psychosis episode and was transferred to a mental hospital, being visited by Sophie and receiving treatment from Doctor Purnell for the rest of his life in peace. 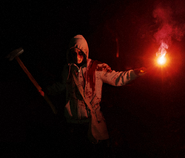