Boom Boom is a major antagonist in the Super Mario franchise.

He is voiced by Lani Minella, who also voices the Koopalings Larry, Morton, Lemmy, and Wendy.

Boom Boom first appears in Super Mario Bros. 3, with Bowser commanding him to occupy the fortress of every world while the Koopalings man the airships. When Mario reaches him he runs back and forth trying to ram into Mario, but regardless fails every time he fights him.

Boom Boom makes his return in Super Mario 3D Land after 23 years. He attacks Mario by spinning his arms around. He maneuvers Bowser's airship fleet alongside his boomerang partner Pom Pom.

Boom Boom is a reoccurring miniboss in the first six worlds in the fortress stages. After defeating him in Acorn Plains, Kamek grants Boom Boom a new ability for each battle, such as making him jump, growing in size, and flight.

Boom Boom is fought in World 2, World 6, and World Flower-12. He fights similarly to Super Mario 3D Land, but can turn himself invisible.

Boom Boom appears as the boss of all three airship levels. His only attack is to ram into Mario.

In Super Mario Maker 2, Boom Boom appears as an enemy.

In Mario Tennis Aces, Boom Boom appears in the Adventure Mode as a foe who prevents Mario access to Inferno Island unless he defeats him in a match. He is also a player character, available starting March 1, 2019. He is a defensive type.

Boom Boom is an assistant that grants a 20% chance of an exploder appearing at the start of the stage, with the percentage increasing when he levels up.

Boom Boom appears in Super Smash Bros. Ultimate as an advanced attack-type primary spirit. His spirit battle is against a giant Squirtle on the Battlefield version of the Unova Pokémon League stage with super armor and deals damage by dashing into the player. At level 99, the spirit can be enhanced to Boom Boom and Pom Pom, with their ability increasing the charge speed for smash attacks.

In the Super Mario Mash-Up Pack, Boom Boom's textures are used for the Piglin mob. 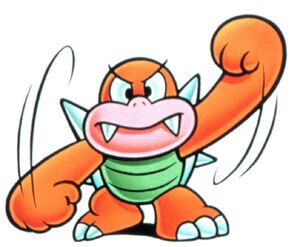 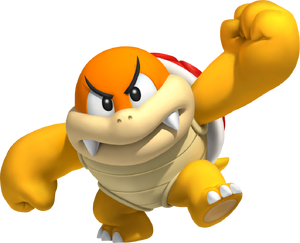 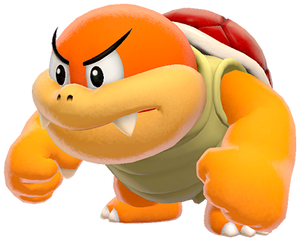 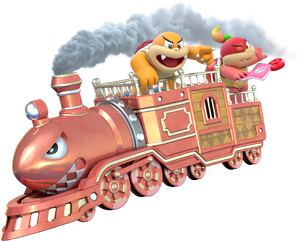 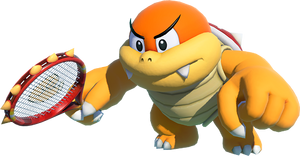 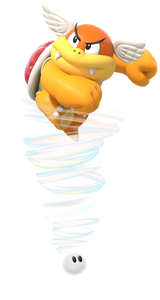