Causing misdeeds and having fun with their king.

Mischevious Ghosts
Boom Boos, also called "Booms", are a group of monstrous ghosts ruled by King Boom Boo. They have appeared in Sonic Adventure 2, Sonic Runners and Sonic Lost World. They also made an appearace in the anime show Sonic X and it's comic book adaption of the same name by Archie Comics.

The Boom Boos have white round bodies with thin hands and two small sharp ends below their body For facial features, they have black soulless eyes and a closed linear mouth which looks like it is knitted up. However, the Boom Boos are about three times larger than the regular Boos.

When shrunk down in Sonic Adventure 2, the Boom Boos' appearance changes to that of attack-type Boos. As such, they gain red and orange colored maniac eyes with black pupils and their mouth opens, revealing black, sharp teeth. They also gain 3 points on their hands and the 2 ends below their body are transformed into one.

Similar to their King, the Boom Boos are mischievous and playful, giggling and laughing whenever they are causing trouble. They are capable of ferociously possesses people and attacks their prey without warning quickly and unexpectedly. 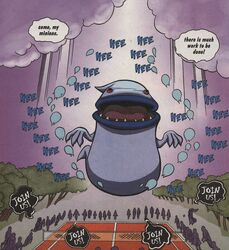 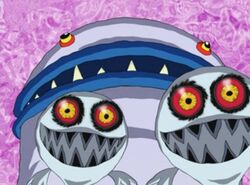 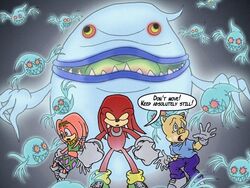