Boostwing is a Corvicon and the brother of Jacknab and Pilfer in Transformers: Robots in Disguise.

Boostwing arrived in Crown City with his brothers and hatched a plan to steal all the gold from the Crown City Gold Depository. He started stealing explosives for the break-in, starting with TNT from a construction site, where he accidentally rammed a car with a pair of teenagers inside. Jacknab and Pilfer threw off the Bee Team's trail by making it appear he traveled at impossible speeds while he raided a fireworks factory, setting off some of its contents to evade the Autobots. He moved on to the Crown City Armory, but was found by the autobots. He finally revealed himself to them and taunted them before making his escape. Strongarm with pursuit and used a freeway ramp to launch herself. She knocked the Crowcon out of the air, followed up by Grimlock who used a goomba-stomp to knock him out. Bootswing's stasis pod was later brought back to Cybertron aboard Prime Force One by Optimus Prime and Drift. 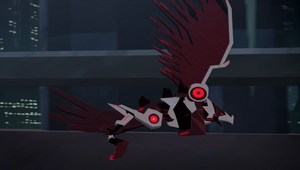 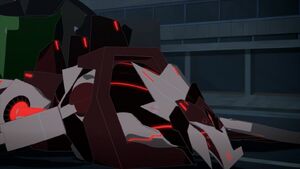