Members of the Outlaw Sewer Cats

Followers to Twitch and Madame Mousey

Kidnapping mice and eating them.

Kidnap and eat all the mice (failed).

Bootlick and Slug are two major antagonists in the direct-to-video film An American Tail: The Mystery of the Night Monster. They are two dimwitted and neurotic cats who serve as Twitch's minions and are members of a group of poor cats who lived in the sewers called the Outlaw Cats. Alongside Twitch, they teamed up with Madame Mousey, a miniature French poodle, to create a robotic machine, the titular Night Monster, to attack and capture all the mice in Manhattan. They also are the ones who controls Mousey's Night Monster robotic machine, alongside their leader Twitch and sometimes Madame Mousey herself. However, their plan was foiled by Nellie Brie, Fievel Mousekewitz, and their friends.

Bootlick and Slug are members of the Outlaw Cats, a group of very poor cats led by Twitch who lived in the sewers.

Bootlick is a dark orange, tall, skinny, and slender cat. While he is not as intelligent as Twitch or as dim-witted as Slug, he is still very neurotic, and has easily make mistakes, such as puking a hair ball after they were sprayed with grease by a Scottish mouse named Haggis, who manages to fend off the Monster machine. The furious Madame Mousey chastises him, saying that he has a brain the size of a walnut. Also, like Twitch, Madame Mousey usually abuses Bootlick as well during the song "Creature de la Nuit".

Slug is a dark blue, large, and overweight cat. He is the largest cat of the group and is not as skinny as Bootlick and Twitch. He also appears to be the most healthy looking of all the Outlaw Cats. Despite that, Slug is shown to be the most dimwitted cat of the group. This is shown in the climax of the film, when Slug attacked Fievel before the little mouse saved himself by tricking him that something is coming and he turned his head quickly before he accidently hits his head on a wall, knocking him out. Fievel was amused by this, saying that Slug is "one dumb cat".

They look up to Twitch, who is the shortest of the group but is also the smartest, as their leader. They follow his orders without question, even to the point of almost betraying Madame Mousey, after Twitch says that they are better off without her. However, Madame Mousey was able to save herself by convincing Twitch how his plan would backfire and that they still needed her. Even after Twitch was defeated by Fievel, Bootlick and Slug noticed he is absent and they didn't know what to do without him.

Bootlick and Slug, alongside their leader Twitch, teamed up with Madame Mousey to create a robotic machine to capture all the mice in Manhattan and is taken to the sewers, where they are to be a food source for the cats, and they can finally not starve and possibly become more wealthy thanks to the money that Mousey has collected from the mice.

At the climax of the film, after Madame Mousey was defeated, Bootlick and Slug assisted Twitch in attacking Nellie Brie, Fievel, Reed, and Tanya. However, the machine was destroyed and it knocked out Bootlick and Slug. However, Twitch was the only one who was not knocked out and continued to attack them, but Fievel managed to defeat Twitch as well. After Twitch was defeated, Bootlick and Slug regained consciousness, but they noticed Twitch's absence and became concerned with what to do without him. Then the High Dog Council arrived and chase the two of them off.

At the end of the film, Papa Mousekewitz explained that the Outlaw Cats were last seen fleeing up East Avenue, and were not seen again. It is possible that Bootlick and Slug escaped the Dog Council and were with the Outlaw Cats when they fled Manhattan. 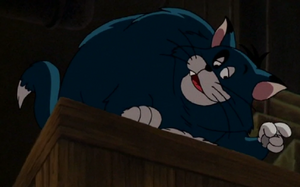 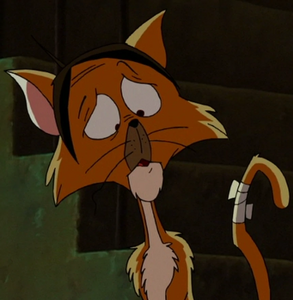 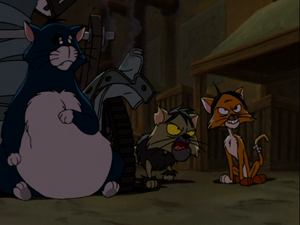 Bootlick and Slug with their boss Twitch.