Robotic Assassin
Bop It is a minor antagonist in Robot Chicken, appearing as the main antagonist in the sketch "Bop It... Or Else".

It was voiced by Zeb Wells.

A teenage boy was at his house playing with a Bop It toy who was telling him to do his usual classic commands, "Bop it!" "Twist it!" and Pull it!" before the Bop it tells him to "Bend it!", Flip it!" and "Extend it!", causing it to turn into a rifle. Then the Bop It tells the boy to "Load it!" which shocks the boy at first, but then he does so by loading the Bop It with a bullet from the toy's package. Then the Bop It tells the boy to "Cock it!" and "Read it!", making the boy read the instruction manual section that reads "Your target is Senator Carlton McDougal. The fifteenth floor of the Gilmore building will provide an unobstructed vantage point." and then tells him to "Memorize it!" and "Burn it!".

Then two cops come and catch the boy as the Bop It tells him to "Fake it!" making the boy lie that he was "just playing with [his] toy". Then after the cops asks him "Why is [his] toy smoking?", the Bop It tells the boy to "End it!" and "Kiss it!" making him try to commit suicide, but then the cops grab the boy and take the Bop It from him. Then at the courtroom, the judge asks the boy sitting at the witness seat if the mastermind behind the assassination present in the courtroom. The Bop It, which was the defendant of the case, tells him to "Zip it!", convincing him not to tell anyone his crime.

However, the boy does so anyway, pointing to the Bop It, exposing his crime to the court, as the Bop It was then found guilty and thrown into prison. In prison, the Bop It's cellmate pulls down him pants' zipper saying "Suck it!", causing the Bop it to shout "Damn it!" before it's raped off-screen. 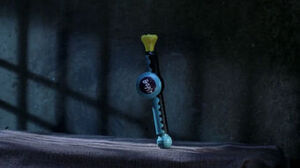 Bop It in prison.