Dragon Quest: The Adventure of Dai

Brutish Monster
Borahorn is a minor antagonist in Dragon Quest: The Adventure of Dai. He is one of the Dragon Riders.

Borahorn takes great pride in being a Dragon Rider. Just like his comrade Galdandy, Borahorn also look down on humans. He is also willing to play dirty tricks to win, and cares less about his dragon, calling his beast pathetic after it was killed by Pop.

Borahorn is a anthropomorphic walrus that wears armor with a dragon-shaped medal on it. Borahorn also had a crown on his head.

Borahorn was summoned by Baran together with other Dragon Riders by Baran to defeat Dai. During their preparation of the battle, Borahorn tried to stop Galdandy from destroying the country of Bengara as Baran would return soon, but Galdandy still attacked the country anyway, much to Borahorn's annoyance.

When they were on their way to the Kingdom of Teran, they were ambushed by Pop who cast a gravity spell on them, killing their dragon mounts as a result. Borahorn then throwed his dragon's corpse away and used his chain to fight Pop, easily wounding him. He then tried to impale Pop on Larhalt's spear, only for Galdandy to grab Pop to toy with him. However, Pop used this chance to kill Galdandy's mount, much to Borahorn's horror.

However, after Hyunckel defeated Larhalt, it was revealed that Borahorn survived. He tried to use Pop as a hostage to kill Hyunckel, however, Larhalt, who was displeased by his comrade's dirty trick, threw his spear to strike Borahorn in the head, killing him. 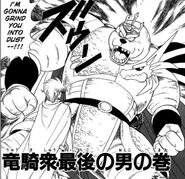 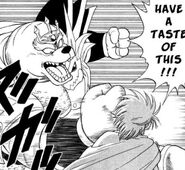 Borahorn's demise.
Add a photo to this gallery

Retrieved from "https://villains.fandom.com/wiki/Borahorn?oldid=3902857"
Community content is available under CC-BY-SA unless otherwise noted.