Leader of The Borg

Assimilate all species into the Borg.

She was portrayed by Alice Krige - who also portrayed Gillian Booth in Law & Order: Criminal Intent, Mary Brady in Sleepwalkers, Holda in Gretl & Hansel, and Christabella in Silent Hill - in Star Trek: First Contact and the series finale episode "Endgame", and Susanna Thompson in Voyager.

The Borg Queen was a supremely lethal and highly intelligent being. She was a calm and iron-wrought leader of the Borg empire, but beneath this serenity sat a sadistic, cruel and relentless lust for power and dominance over whatever planet and species she encountered. She also had a xenophobic, elitist and Social-Darwinist view over other organic life forms, viewing them as only fit to either be destroyed or assimilated to her vast ranks. She also referred to herself as 'The Borg' in a narcissistic way, meaning that she was the dominant species in the galaxy, not the leader of the dominant species of the galaxy. These traits are textbook demonstrations of a calculating megalomaniac.

It is unknown when a Borg Queen first appeared within the Collective, but it is known that she was assimilated around the age of 7-8 and was already present in 2354.

A Borg Queen defined herself as, "I am the beginning... the end. The one who is many. I am the Borg." Although this might suggest she would be an individual within the Collective (while addressing them, she referred to drones as "my drones"), she was not. The purpose of a Borg Queen was to bring order to chaos.

Her appearance was that of a humanoid female of Species 125. In accordance with the Borg pursuit of perfection, a blending of the organic and synthetic, very little of her original humanoid form remained. Her face and upper torso were organic while the rest of her body, including her skull and spinal cord, were synthetic. Because of her disembodiment she saw herself as the epitome of perfection. The Queen had her own chambers within the Borg Unicomplex from which she could oversee and control the Borg via command interface. Whether she had her own ship or not is unknown, but she used different Borg vessels to travel, such as a Borg cube, sphere, or diamond. When her physical presence was not necessary her organic part resided above this chamber while her synthetic parts were stored below it, under the floor. If she desired to do so both could be brought together and in doing so create a humanoid form for herself.

In Human terms, a Borg Queen could be characterized as ruthless. She would do anything to protect the Borg Collective. Where drones showed no emotions, the Queen herself did. When necessary she would employ psychological tactics, like extortion or plain intimidation to get what she wanted. The Queen even displayed self-preservation when she was held at gunpoint by Captain Janeway, who threatened to kill her. On a personal level she considered Seven of Nine her favorite drone, because the Queen considered her to be unique. This had to do with Seven's experiences as an individual when she served aboard USS Voyager. The Queen's goal was to re-assimilate Seven into the Collective to enhance the Borg's, and so her own, perfection. She launched her vessel and followed the Delta Flyer into a transwarp conduit. The attempt failed, but she survived.

The death of a Borg Queen did not seem to affect the Collective or its hive mind. When a Borg drone died, its memories would still be within the hive mind. There was no evidence that a Borg Queen would be more than a drone. Borg drones were capable of functioning without a queen for any length of time by forming a hive mind of their own.

It was thought by Federation exobiologist Erin Hansen that the Borg Queen functioned like the queen of an insect hive, to coordinate the drones. Evidence of this was later seen when the Queen countermanded the Collective's judgment about assimilating Voyager. While the Collective felt that assimilation was warranted, the Borg Queen countermanded them justifying the decision due to the fact that Voyager didn't compromise their security. The Queen, while providing coordination for the drones she commanded, also provided other functions such as regulation of the Borg's transwarp hubs and interspatial manifolds. She effectively brought "order to chaos" for all things.

The Borg Queen that was present in 2377 was assimilated when she was a child, together with her parents. Years later she could still hear them.

The existence of a Borg Queen was first established sometime prior to 2365 by the exobiologists Erin and Magnus Hansen. However, because the Hansens were assimilated, their discovery never reached the Federation. It was not until 2373 that the Federation became aware of her when the Federation starship USS Enterprise-E prevented the assimilation of Earth. This was the second attempt by the Borg, also known as the Battle of Sector 001. They traveled back to Earth's past to During this conflict, while Captain Jean-Luc Picard was trying to destroy the Borg, the Queen claimed to have been present during the Battle of Wolf 359, and even admitted that Locutus of Borg – the assimilated Picard – was intended to be a singular intelligence – her counterpart, intended to ease the burden of loneliness. However, when Picard continued to resist, even when he could not control Locutus' body, she was regretfully forced to turn him into the form in which Starfleet encountered him, a glorified drone. Whether or not she physically took part in the Battle of Wolf 359 is unknown.

Picard killed the Borg Queen after she tried to persuade Lieutenant Commander Data to give her the encryption code by which he had locked the Enterprise's computer. Data then sides with Picard, stating the Borg credo, "resistance is futile," this time deciding to keep his robot persona, and that the Borg army was too dangerous to be kept alive. After a climactic fight with both Picard and Data, the Borg Queen is brought down by Data. Nerve gas from the warp core plasma coolant released by Data destroyed her organic parts, after which Picard broke her cybernetic spinal cord, ensuring she could no longer function.

The second encounter with a newly revived Borg Queen was in 2375 in the Delta Quadrant. Here the lost Federation starship USS Voyager tried to rescue the former Borg drone Seven of Nine, who was then part of Voyager's crew, when the plan to steal a transwarp coil from a Borg sphere did not work out as planned. The Queen also revealed that the drone Seven of Nine was not really freed by Voyager from the Collective, but allowed to leave by the Borg. During this encounter the Borg Queen hoped to assimilate Seven of Nine again, who experienced life as an individual for two years, and so add to her own perfection. However, Seven rejected the Queen and fled with a rescue mission sent by the Voyager in the Delta Flyer. A Borg vessel was sent by the Queen to intercept the shuttle, but it was destroyed in the attempt.

The Borg Queen was one of several real people adapted into a character in Kelis' play, based on descriptions from B'Elanna Torres.

In 2377, a Borg Queen was again encountered by Voyager. This time the Queen wanted to destroy Unimatrix Zero, a virtual world populated by regenerating Borg with a genetic mutation. This world was discovered by Seven of Nine and posed a threat to the Borg. During Voyager's efforts to rescue this virtual world the Borg Queen demonstrated her powers by destroying a Borg sphere because she could no longer "hear" only one drone. When a nanovirus was released to prevent the detection of Unimatrix Zero, the Queen destroyed several Borg vessels, killing 75,000 Borg drones in the process, in the hope of persuading the captured Captain Janeway to give her the antidote.

The last encounter between a Federation starship and a Borg Queen was in 2378, and again Voyager played a part in it. Voyager accidentally discovered a Borg transwarp hub within a nebula and were helped by Admiral Kathryn Janeway, who came from an alternate timeline around twenty-three years in the future, to use the Borg transwarp network to get back to the Alpha Quadrant. Because the Borg guarded their transwarp hub closely, Admiral Janeway devised a plan by which she would infect the Borg Queen with a neurolytic pathogen and in doing so making her lose control over the force fields which protected the interspatial manifolds. When the admiral was captured by the Borg, near the unicomplex, she was assimilated by the Borg Queen herself. Soon after the Queen began to lose control over drones. The pathogen even made her lose control over her own synthetic parts, as her body literally fell apart. Her death caused the destruction of the unicomplex and despite her efforts Voyager reached Earth safely. The Borg sphere sent after them by the Queen was destroyed by Voyager's transphasic torpedoes, given to them by the admiral from the future. After the Queen's death and the destruction of the Borg sphere, Voyager has finally returned to the Alpha Quadrant after spending seven years of being stranded in the Delta Quadrant. 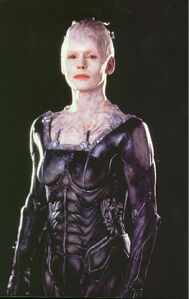 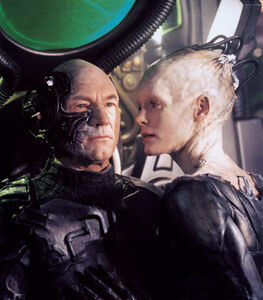