Kill Mulan and her army

Rule over the the land
Destroy China
Kill the Emperor to avenge his father's death (all failed).

Bori Khan is the main antagonist of the 2020 Disney live-action film Mulan, a remake of the 1998 animated film of the same name.

A Rouran warlord, Khan sought to annihilate China and kill the emperor in revenge for the death of his father. To achieve this end, he allied himself with a powerful witch, Xian Lang, who serves as the film's secondary antagonist. Khan takes the place of Shan Yu, the main antagonist of the animated film.

He is portrayed by Jason Scott Lee, who also portrayed Whitey in Back to the Future Part II and Caine 607 in the 1998 film Soldier.

Bori Khan is established from the beginning to be an agile warlord, managing to kill, alongside his men, dozens of Chinese soldiers in rapid succession. Like Shan Yu, Khan is ruthless and bloodthirsty, stopping at nothing to ensure China and its people are conquered.

The similarities between the two stop there, however. Unlike Khan, Shan Yu never had any real reason or motivation for conquering China beyond lust for power. Khan, on the other hand, seeks to destroy the empire out of revenge for the murder of his father, implied to have been at the hands of China's emperor, though the exact circumstances are never explained. Additionally, Khan is shown to have a deep, open resentment to women and their roles in society, exemplified best by his horrid treatment of Xian Lang and his initial dismissal of Mulan as a "child". Shan Yu, by contrast, never showed any signs of sexism, but instead, showed surprise when Mulan revealed herself as the soldier who annihilated his army.

Böri Khan was the warrior leader of the Rourans, he has entered the Pallace when there attacking them especially Xian Lang were attacking the warriors and killed them but he was in a war fighting to face them back with his violent battle.

Since Mulan was battling against him he was caught in an avalanche and defeated the Rourans because he escaped from the avalanche and she would battle against Xian Lang, after that he was shot dead. And after Xian Lang's death, she would battle against Böri Khan and Mulan cuts the rope and falls down into the pallace and he was killed by an arrow. 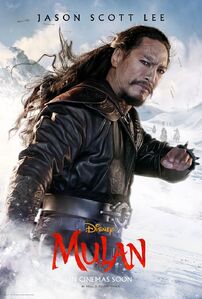 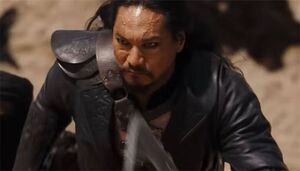 Bori Khan's Death
Add a photo to this gallery

Retrieved from "https://villains.fandom.com/wiki/Bori_Khan?oldid=4285291"
Community content is available under CC-BY-SA unless otherwise noted.