Hacking and harassing his co-workers.

Get rich by helping Janus (failed).

Boris Ivanovitch Grishenko (Russian: Борис Иванович Гришенко) is a supporting antagonist in the 1995 James Bond film Goldeneye. He is a Russian computer programmer who is in league with Alec Trevelyan of the Janus Syndicate.

Boris started working for Janus by revealing to them the location of the Russian bunker where the controller for the GoldenEye EMP satellite weapon is located. Just moments before the attack on his base, he hacks into the U.S. Department of Justice, much to the disgust of his colleague Natalya Simonova. He reveals to her that he wrote a virus which deactivates the security of anyone who tries to track him virtually. After leaving an insulting message on the FBI website, Boris heads out of the bunker claiming that he is taking a smoking break. Once outside, the helicopter of General Ourumov lands next to him. Ourumov and his associate Xenia Onatopp enter the bunker and after ordering a demonstration of the GoldenEye satelite, Xenia starts shooting up the bunker, killing soldiers and technicians alike. Boris later escapes the attack alongside Ouromov and Xenia, unaware that Natalya survived the attack.

Ourumov later reports to the Russian Defense Minister, passing off Boris as a lucky survivor. Natalya eventually contacts Boris via the internet, believing him to be a friend. After telling him that Ourumov shot everyone at the bunker, Boris tells her to meet him at a nearby church and to trust no one. At the church, Boris let Onatopp capture Natalya.

After saving Natalya and killing Onatopp, Bond does not know how to locate Trevelyan within his base. By accessing the computer inside the train Natalya manages to hack inside Boris' network. Although Boris tries to rip out his servers, Natalya finds out that the base is at Cuba.

At the base, Trevelyan tells Boris to heave the base out of the lake. Boris claims that he is not ready, but Trevelyan angrily urges him to do it. After the base has emerged, Trevelyan hands Boris the GoldenEye, threateningly telling Boris that it better be working. While Boris makes the final preparations, Trevelyan is handed a tablet by one of his henchmen and watches footage of Bond and Natalya sneaking onto the base. He sends his men to deal with Bond and orders Boris to have the GoldenEye satellite target London. Eventually, Bond and Natalya are captured and brought before Alec. Boris is delighted to see Natalya but she furiously slaps him and continues to attack until she is restrained by guards. He picks up Bond's explosive pen that had fallen to the ground and starts to click it. Natalya tells him of her disgust by his betrayal and that millions of people may die because of his sick games.

He furiously raises a clenched fist to her face, but Trevelyan stops him and sends Boris back to his computer to check whether Natalya has done any harm hacking before she was captured. Big-mouthed, Boris brags that Natalya does not have his skills and would be unable to hack into the GoldenEye, but is proven a liar when an alarm goes off, stating that GoldenEye is about to reenter earth's atmosphere which would cause the satellite to ignite and explode. Realizing that Natalya hacked into the system and changed the access codes, Boris angrily points this to Trevelyan, who threatens to shoot Bond unless Natalya gives up the codes. Boris tries to hack back into the system, viciously clicking the pen, whilst Bond counts the many times it is clicked knowing that three clicks arm it, whilst three more disarm it. Bond senses an opportunity and knocks the pen from Boris' hand which falls near the gasoline canister, causing it to blow up. Fueled by the gasoline and the explosive charge Bond set earlier, the explosion destroys almost the entire control room. However, Boris' computer equipment survives as he continues breaking Natalya's code. Trevelyan dispatches a guard to kill Boris if he fails to encrypt Natalya's code or try to escape and then sets off to hunt down Bond.

Eventually, Boris manages to break Natalya's code and resets the antenna. However, Bond has reached the antenna and disabled the mechanism, causing grave harm to the system. Upon seeing this, Boris screams in complete anger as a giant explosion caused by the damage destroys the remainder of the base and kills Trevelyan. Miraculously, Boris survives. Emerging from the ruins, he loudly exclaims that he is invincible. But he celebrates too soon as at the same moment, the canisters behind him that contain liquid nitrogen explode, covering and freezing him to death.

Though a brilliant and intellectual computer programmer, Boris is known to be extremely amoral and perverted, mostly by the way he uses female body bits as his access codes and passwords and also shown to be fully arrogant, egocentric, and self-confident, especially when he shouted "I am invincible!" whenever he succeeded in finishing a task. He later becomes a backstabbing, vituperative, and traitorous person who has sided with Janus to steal a dangerous electronic satellite that was used to murder his fellow programmers at Severnaya to leave no witnesses of the theft.

He is also shown to be friendly and demonstrative with Natalya, who sees him just as an annoying and rebarbative little brother, and is a bit more patient and empathetic with his wayward antics, but then her friendship with him turned to hatred when she realized that he was partly responsible for the murder of Anna and all the other people at the Severnaya observatory as well as him being willing to kill more people for personal profit.

Boris was know to have superb computer skill, even able to hack into the U.S. Department of Justice. He also uses his skills to hack into the computer of his co-workers, annoying them with the vulgar terms that he changes their passwords to. He is shown to be quite corny and sentimental, so he often displays inappropriate images on Simonova's computer, making her ask for the password to erase it constantly. 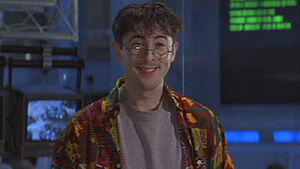 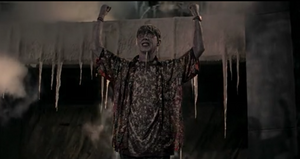 Not so invincible after all, eh, Boris?