Retrieve the ArcNet and prevent it from being deployed so it cannot prevent the Boglodite invasion (1969 self).
Travel back in time to 1969 to kill Agent K for maiming his arm and alter the future in his favor (2012 self).
Consume every planet in the universe.
Kill Agent J and anyone who tries to get in his way (all failed).

Boris, also better known as Boris the Animal, is the main antagonist of the 2012 sci-fi comedy film Men in Black 3. He is an intergalactic criminal and the last known member of the Boglodite race, as well as their presumed leader. He was apprehended by Agent K at Cape Canaveral in Florida on July 16, 1969. He is cruel, sadistic, and treacherous, and the pitch of his voice changes constantly through the movie. He wanted to deactivate the ArcNet Shield to allow his fellow Boglodites perform an invasion and feed on Planet Earth.

He was portrayed by Jemaine Clement, who also played Nigel in the Rio series, Fleshlumpeater in The BFG, and Tamatoa in Disney's Moana.

Boris the Animal has a fearsome reputation of being brutal, cunning, sadistic, loathsome and traitorous, so much that he was locked up at LunarMax on the moon and chained like an animal. Completely antagonistic, obsessed, and vengeful, Boris is a preposterous sociopath with no concern of human or alien life. He would murder anyone who got in his way or just for the sadistic entertainment, even if they were people who had helped him in the past such as a fellow LunarMax prisoner named Obadiah Price, and his girlfriend who had helped him escape. The only thing that Boris cares about is his henchman dubbed the "Weasel" who he treats like a pet.

Boris has an aggressive sense of humor when he had just arrived at Coney Island. He threatened to rip off a man's hand if he touched his bike. Boris can be highly arrogant at times and despises being called by his nickname, if someone would do so he would angrily correct them. While he is incredibly violent and heartless, he is quite intelligent and manipulative at times and has a total understanding of paradoxes. He realized that if he murdered K and prevented him from surrounding Earth with a protective force field, the Boglodite race would survive and destroy the planet. Boris is notoriously known for holding grudges and wanted revenge on K for removing his arm despite that it was 43 years ago.

On July 15, 1969, Boris killed Roman the Fabulist whilst searching for the ArcNet Shield at Coney Island, according to the MiB Archives. Later, at Cape Canaveral where Agent K placed the ArcNet Shield on the Apollo 11 rocket, Boris attempted to stop K from doing so, only to have his arm blown off and sent to prison. K regretted not killing him for many years following the incident. The establishment of this shield around Earth prevented the Boglodites from entering, parasites that strip a planet of its resources, thereby leading to their extinction. This only fortified Boris's grudge against Agent K. However, his pet henchman, the Weasel, somewhat escapes from being caught and remained hidden for the next 40 years.

After 43 years of being imprisoned at the LunarMax Prison, Boris escapes from the prison made for him with the help of his inmate Obadiah Price and his girlfriend Lilly, who came with the Weasel so that it could free Boris by shooting the cuffs. As they walk through the prison exclusively made for him, the guardians in the prison all go and try to prevent Boris from escaping. He manages to defeat them all by creating a hole outside of the building that suck them in. Lilly gets caught by the black hole, so she begs Boris to save her, but he kills her instead. Boris even kills Price by pelting him with two spikes. With the deed done, Boris goes and attempts to kill K.

After an encounter with both Agent K and J at the roof of a Chinese restaurant, Boris instead gets the idea to kill K by traveling back to the year 1969 to stop him from making his race go extinct and shooting off his arm. Boris meets his past self, who soon realizes his identity and tells him what to do in order to avoid being set in the prison. However, being the feral that he was, he had a hard time even talking to himself, stating he shouldn't listen if he was defeated. At one time, they started growling at each other in a somewhat comical scene before reaching ground.

The younger Boris manages to track down Griffin, the rightful possessor of the ArcNet Shield, but in a brief encounter with the young K and J, they manage to rescue Griffin and Boris escapes. However, both the young K and J need to install the ArcNet in the Apollo 11 at Cape Canaveral (with the help of an Army Colonel named James Darrell Edwards II, who happens to be J's father) before it blasts off into space. The two Borises, along with their Weasels, then follow the agents to Cape Canaveral, where the elder Boris fights J while the younger Boris tries to stop the younger K from installing the ArcNet into the rocket. Just as the elder Boris attempts to kill the young K, J calls him by his nickname, thus causing him to get distracted and annoyed as he fires his spikes against agent J.

J is then pelted with three-four spikes before pushing himself and the elder Boris off the launch tower. Eventually, J time-travels himself back to where he faces off the elder Boris, however, this time, he remember where the spikes hit him and uses this to dodge the spikes instead, much to the elder Boris's shock. This allows J to uppercut punch the elder Boris off the tower. Around the same time, the younger Boris's left arm is still destroyed by K when he uses one of the fueling hoses containing liquid oxygen to freeze his arm and shatters it by shooting it. Following the successful installment of the ArcNet, the agents escape from the tower as Apollo 11 begins to lift off, and the elder Boris and the Weasel are both incinerated by the Rocketdyne F-1 engine exhaust from the Saturn V lift vehicle. As the younger K reunites with Colonel Edwards, the younger Boris arrives, having escaped the tower, and launches a spike on K, only for the Colonel to receive it himself, an act witnessed by J (who was shocked).

Following the Colonel's death, the young K holds the younger Boris at gunpoint, and Boris, revealing his true form, attempts to goad K into arresting him, so that he can start the cycle again. However, the young K declines to do so, and instead shoots the younger Boris, killing him and the Weasel for good, so that he has managed to avenge the Colonel's death. This erases their older selves from history, also avenging the deaths of the humans and the aliens they had killed.

With Boris and the Weasel finally dead, the parasitic Boglodites starve themselves into extinction over the next 40 years, as they can't survive without feeding off resources from a planet. 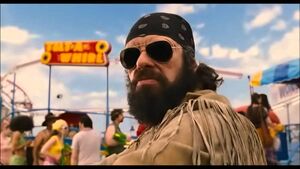 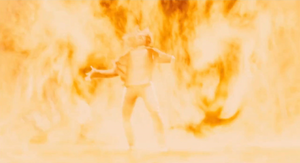 The elder Boris' death as he's being consumed by the engine exhaust. 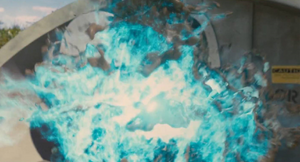 The young Boris' death as he's being blasted by Agent K's gun. 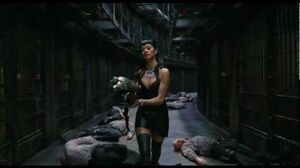