Keep Kawaki, Boruto, Sarada, and Mitsuki from retrieving the container that Naruto is sealed in.

Trigger the Infinite Tsukuyomi.
Capture Boruto and Kawaki (all failed).

Elemental Cult Leader
Boro (in Japanese: ボロ, Boro) is a member of a Kara and a major antagonist in the anime and manga Boruto: Naruto Next Generations. He is also the leader of a cult who worships the Ōtsutsuki Clan.

When in serious situations such as after Kara lost Kawaki, Boro is mostly silent and willing to listen to Jigen as the latter gives his orders but cursed Kawaki for leaving after Kara had given him that much power. However, in other situations, Boro is shown to have a humorous and mocking side, as he took Delta’s anger lightly after she lost to Naruto and mockingly said he expected her to be down. Boro was also shown to be a manipulative cult by creating sicknesses in small villages and "curing" the villagers to gain worshipers. Due to his tremendous power and prowess, Boro is shown to be rather confident and arrogant, as shown by how he is quick to guess without showing any fear that Uchiha Sasuke had arrived to save Naruto before realizing it was Kawaki, Boruto, Sarada, and Mitsuki and Boro also taunted and mocked them as he repeatedly outmatched them in battle. Boro was willing to kill without hesitation his enemies despite their status as children but at the same time he showed a lack of interest in Mitsuki and Sarada, not bothering with them until they attacked him and even offering Mitsuki to escape, showing he can show mercy to cooperative individuals. A devoted and loyal member of Kara, Boro was particularly interested and grateful at Boruto for becoming Momoshiki's vessel and wanted to take him back with Kawaki and also expressed dismay at how Kawaki had changed so much, stating that Kara would have to retrain Kawaki from scratch.

In the past, Boro joined Kara and became an inner member within the organization. Boro also had a history with Kawaki, the vessel of Kara, and appeared to be dismissive of his foul personality but it was unknown if Boro had a part in Kawaki's abuse, though he did indicate that he participated in Kawaki's training, as he noted on how much training Kara put on him and how difficult it would be to retrain him from scratch. Because of the abuse, Kawaki escaped from Kara.

Boro first appears alongside the other Kara members when Jigen called them in to search for the missing vessel. Boro appears later alongside another Kara member, Code, where they both make fun of Delta when she lost in her battle against Naruto Uzumaki. He is also present when Delta told Jigen about Boruto who have a kama seal.

When Jigen successfully seals away Naruto and the Nine-tails within a container, Boro enters the dimension where Jigen fought against both Naruto and Sasuke. While in the dimension, Boro encounters Kawaki, Boruto, Sarada, and Mitsuki. Kawaki is not pleased to see him and the latter wants to retrieve the container that contains Naruto. Boro did not want them to retrieve the item and tells them that they have to be careful with the container because if it break the contents within it will spill out. Boro immediately gets into battle against Kawaki and the Leaf ninja. During the battle, he is surprised to see both Kawaki and Boruto absorb his attack and remark about their Kama seals. He then uses the mist jutsu to make it harder for Kawaki and Boruto to fight him. When Kawaki and Boruto was down, Boro intends to capture both of them until Mitsuki intervenes. Despite Mitsuki’s effort, Boro is able to knock him down and then threatens to kill him if he gets in the way. Sarada also intervenes in the fight to attack Boro by throwing a large rock at him. As the team escapes, Boro remarks how he knows they will return soon to try and rescue Naruto.

As the team battles Boro, Sarada realizes that he is using a Ninja Tool that releases a virus. Mitsuki manages to get the antibody from Boro's blood. Throughout the battle, the team does damage to him, but are unable to defeat him. They realize that his core must move around his body. Sarada has the team distract him so she is able to pinpoint the core and destroy it with the Chidori.

Once the core is destroyed, he loses control over himself. Kawaki is then able to free Naruto from his prison. However, Boro becomes gigantic and grabs Sarada. Boruto then suddenly is possessed by Momoshiki Ōtsutsuki and has the Jogan. Boruto, while possessed, has tremendous power and easily defeats Boro with a powerful Rasengan. Boro was destroyed from the attack. 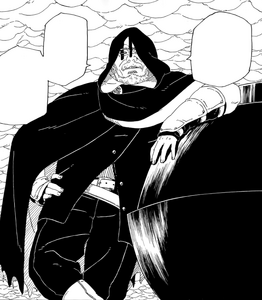