The Boss is the main antagonist of the musical bullet-hell Just Shapes & Beats.

The Boss first appears disguised as a tall, all gray, and possibly dead creature inside a cave, attracting the protagonist. However, when they get close, they impale the hero, and reveal themselves. Then, they chase after the larger square and the protagonist, corrupting the land and its inhabitants wherever it goes, before punching out the large white tree in the area. After a small scuffle during the song "Long Live the New Fresh", and seeing the opportune chance, it slams the tree back in during the song "New Game", but upside down, thus creating a huge, red tower. Immediately after doing this, it swallows an odd residue leaking from one of the triangles formerly making up the tree, becoming its second form, and then resuming attacking the protagonist.  After this, the sailboat is restored, allowing the player to head to the Volcano Area, formerly a mountain that was corrupted by one of the triangles.

After the player clears the Volcano Area, they ride the sailboat to the east, where the Boss has built a massive factory that uses another triangle to corrupt the remaining denizens of the land. Infiltrating the factory, the player frees the helicopter that helps them travel deeper into the structure; unfortunately, they are too late to stop the triangle from corrupting a large square with hands that has been seen throughout the game. The player survives against the large square's attacks until they are able to overcome the corruption, enabling the player to purify the second triangle.

With the help of their three allies, the player opens the way to the villain's tower, where the circle confronts them alongside its remaining minions. After an exciting battle during "Final Boss", the player seemingly triumphs once more, claiming the Boss's crown and the final triangle. But, out of nowhere, the Boss appears and blow them off the tower. As the player climbs back up, the Boss absorbs the final triangle completely, rapidly mutating into a monstrous final form that destroys the player in the song "Annihilate". The player tries to revive, only for the Boss to smash them into pieces.

The player's allies mourn, but the other two triangles react, prompting the large square to use them on the player's remains. The triangles' power revives the player in an invincible new form (starting the song "Til' It's Over") that can attack the final boss directly, destroying it and forcing it to relinquish the final triangle. Reunited and purified, the three triangles undo the damage wrought upon the land, restoring everything to normal. The Boss later appears in the credits, grabbing a pair of headphones and playing at a DJ stand, celebrating with his enemies, possibly ending his evil ways.

In its first form, the Boss has a circular body, with one eye, horns, and fangs. It also has two long spiked arms with circles on its palms. The second form changes its face, so it has two eyes and a constant cheeky grin on it. This can also change its face into a cannon that can shoot lasers or spiked balls. Its final form has two stages to it, first starting off as an unsightly eyeless, mouthless thing that drips some sort of deadly liquid from where its eyes were. Its arms as also transform into a handless strands that trap the player and house centipede-like monsters. Then, it transforms again, gaining a spiked head with fangs.

Due to the lack of dialogue in the game, the Boss' personality is unknown, but he seems to be a manipulative trickster from the start (attacking the player through a disguise), and brutish (trying to use its fists to destroy the larger square). It also seems to like playing guitar, and keeps wanting to transform to become more powerful. 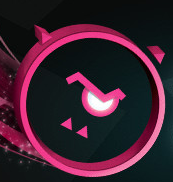 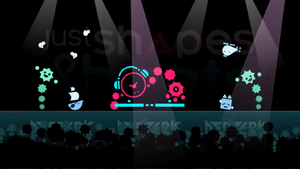 The Boss celebrating with the other characters during the credits.

The Boss with arms in-battle.
Add a photo to this gallery 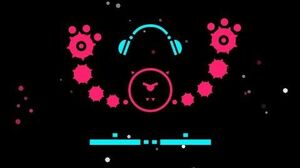 Just Shapes and Beats - ALL BOSSES ENDING
Add a photo to this gallery
Retrieved from "https://villains.fandom.com/wiki/Boss_(Just_Shapes_%26_Beats)?oldid=3534144"
Community content is available under CC-BY-SA unless otherwise noted.