Strength
Leadership
Producing a blade from a band on his arm

Raiding ships for their cargo.

Tormenting hostages before killing them.
Strangling his minions when they show fear.

Kill Samus and everyone on board the Crest (both failed).

Boss is the main antagonist of Chapter 1 for the 2005 manga Metroid Prime: Episode of Aether, the manga adaptation of the 2004 video game Metroid Prime 2: Echoes. He is an unnamed leader of a squadron of Space Pirates that attack the Crest.

Boss appears when he and his pirates hijack the merchant ship Crest to steal their cargo. He is first seen when he smashes through the gate to the bridge and slaughters the guards in his way. As the captain pleads for mercy, Boss observes the remaining passengers on the bridge and doubts a ransom to be made, thinking to himself of finishing them off instead.

Among the passengers, Boss directs his attention at two children, a boy comforting his younger sister that somebody will come and rescue them. Boss scoffs the boy's wish, claiming that no hero will come to save them and kicks him around, taunting him for trying to protect his sister and declaring he will kill all eight remaining passengers on the Crest.

Before Boss could harm the boy and his sister any further, Samus arrives and destroys the Pirate ship. Hearing her response to the SOS signal through the computer, Boss strangles one of his pirates when he panics, and orders the others to terminate Samus immediately, claiming her death to be exactly what she deserves for destroying his ship. Despite the Pirates' strength in size and boasting of their impenetrable power, Samus easily blasts her way through the pirate forces and makes her way to the bridge.

Once Samus reaches the bridge of the Crest, Boss grabs the boy and the captain and takes them hostage, threatening to take their lives if Samus refuses to lower her gun. The captain orders Samus to lower her gun and not provoke the Space Pirate any further, but Samus informs him that the slight chance she lowers her gun will Boss have the opportunity to kill everyone on board, to which Boss compliments Samus for her "flattery".

Along with the boy's words to fight back, Samus begins charging her Arm Cannon. Boss admits Samus for her guts and sarcastically tells her to have the hostages. He then throws the two at her while also charging towards her. The moment Samus either catches or brushes them aside will Boss be able to slice all three of them in half. However, Samus instead jumps on the captain, pushing him and the boy out of the way of Boss' blade. She flips in the air before shooting her Arm Cannon straight into Boss' chest, killing him instantly.

Boss is a large, muscular alien wearing black armor. He has an "X" shaped scar on his helmet and a large blade that comes from a bracelet around his right arm.

Boss is a cruel and ruthless Space Pirate who refuses to let anything interfere with his plans. A homicidal sadist, he is eager to kill anyone who stands in his way, including innocent children and his own henchmen should they show fear. 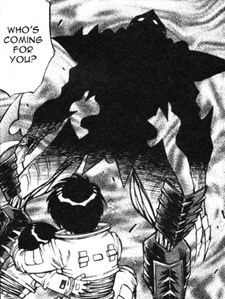 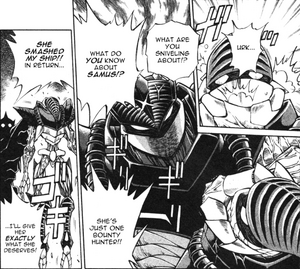 Boss strangling one of his men. 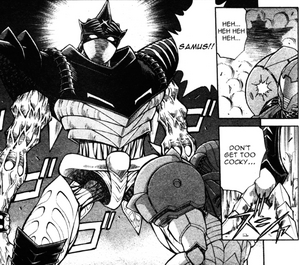 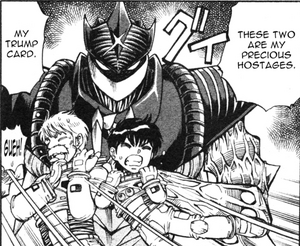 Boss taking the boy and the Crest captain hostage. 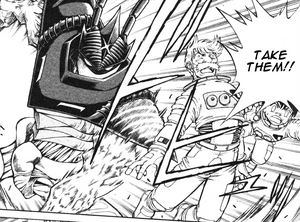 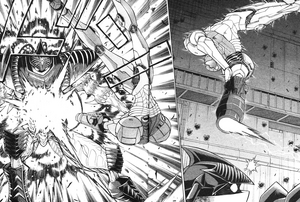 Boss' demise.
Add a photo to this gallery

Retrieved from "https://villains.fandom.com/wiki/Boss_(Metroid)?oldid=4109547"
Community content is available under CC-BY-SA unless otherwise noted.