Bomb seven countries and become the King of the Solar System (JAKQ vs. Gorenger).

Boss Iron Claw is the leader of CRIME and the secondary antagonist of J.A.K.Q. Dengekitai. He is a mysterious man, whose true identity is unknown, who seeks to establish the world's largest crime organization in Tokyo, Japan. In episode 23, he is revealed to be a subordinate of Shine.

He later returns as the main antagonist of the movie J.A.K.Q. vs. Gorenger, now leading the Crime Big Four.

He was portrayed by Masashi Ishibashi, who would later play the Sentai villains Commander Hedder and General Kar.

Iron Claw was a longtime rival of Big One, the pair having clashed numerous times in the past. He at some came into contact with Shine and began working for him, acting as the direct leader of CRIME while Shine led it from behind the scenes.

Iron Claw and CRIME soon began their efforts to establish the world's largest crime family in Tokyo, Japan, but were opposed by J.A.K.Q., a team of super cyborgs assembled by ISSIS to thwart CRIME's nefarious plans. After JAKQ's continued victories against CRIME's Mechanical Monsters, Shine appeared and informed Iron Claw it was time to expand their scope to the entire world.

Towards the end of the series, Iron Claw began construction on converting Crime Fortress Island into a set of giant rockets as per order of Shine, though Iron Claw did not know what they were for. He later discovered that Shine had sent the Super Cyborg Great King Icarus to replace him as the leader of CRIME, much to Iron Claw's displeasure, and oversee the construction of the rockets. It turned out that the rockets were for "Operation Stardust", a plan to knock the Earth out of orbit and into the Shine Galaxy where Shine's people could colonize it.

After Icarus fled from battle with JAKQ, Iron Claw, growing tired of Icarus' leadership, executed him for his cowardice. Shine then appeared and demanded an explanation for why Iron Claw had killed his Invader Robot, to which Iron Claw answered that Icarus had acted cowardly. Shine agreed with Iron Claw's judgment and decided to overlook his killing of Icarus, telling Iron Claw that if he dealt with JAKQ he would be made "Emperor of the Solar System". Iron Claw then assumed his ultimate fighting form, a full silver-bodied super cyborg called "Warrior Iron Claw", and went out to go finally defeat them. He took Joker and his family hostage after they returned to Japan, in order to prevent Joker from performing surgery on an injured Karen Mizuki. Though Iron Claw believed his victory was assured, ISSIS was able to rescue the hostages by using freezing gas to cryogenically freeze the inside of the truck where Iron Claw and Joker's family were, enabling the hostages to be safely removed and unfrozen while Iron Claw was put inside of a lead casket and taken to be buried.

Despite this, Iron Claw unfroze himself and escaped the casket and went to go settle his score with Big One. His final battle with Big One was interrupted when the rest of JAKQ arrived to assist Big One. Facing all five members of JAKQ, Iron Claw declared that he was the Emperor of the Solar System and that he would defeat JAKQ, but Spade Ace then revealed that they had already defeated Shine and tossed his true form, a circular alien satellite, down to Iron Claw. Iron Claw picked up the sphere, who told Iron Claw that he was the Emperor of the Solar System and ordered him to defeat JAKQ, but Big One retorted that Iron Claw was nothing more than Shine's puppet. Iron Claw then tossed Shine to the ground and went to fight JAKQ anyway. In the final battle of the series, JAKQ defeated Iron Claw with the Big Bomber, seemingly destroying him.

However, Iron Claw returned very much alive in JAKQ vs. Gorenger, having joined forces with the Crime Big Four and the remnants of the Black Cross Army. There, he planned to bomb seven countries (the United States, the Soviet Union, the People's Republic of China, France, the United Kingdom, West Germany, and Japan) and go out into space until peace on Earth was settled—then, he would have become the King of the Solar System. The Gorengers and JAKQ crushed his plans when Big One gave Spade Ace a device which would set off a rocket claw Big One had switched with Iron Claw before transforming. The independent claw pressed the Detonate button and the City-Buster bombs destroyed the craft that Iron Claw was in, taking Iron Claw himself with it, and Big One now kept the real claw as a memento.

His name was derived from his right hand being a claw made of iron. While appearing human he was later revealed to be a cyborg much like his foes, JAKQ and Big One. His right hand was a powerful Iron Claw, which can fire talon-like missiles. It could also detach from Iron Claw's body to attack enemies independently.

When ©Na replaces the Super Sentai Series with her own Super ©Na Series, she takes Iron Claw's place as Crime Empress ©Na in her version of J.A.K.Q. Dengekitai. 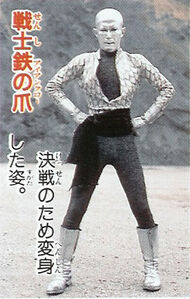 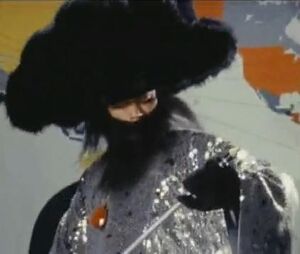 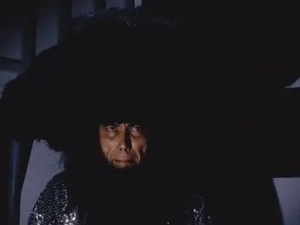