Leader of the Bounty Hunters' Guild

As Trandoshan, Bossk is naturally aggressive and not very social. He is also a serious, brooding and ruthless individual who doesn't like when someone gets in his way. Like the rest of his species, Bossk enjoys hunting, especially Wookies.

Despite his natural cruelty, Bossk does however possess a certain sense of honor, as can be seen from his habit of always keeping even the toughest promises. He doesn't like to talk about his past.

Bossk was born the son of the leader of the Bounty Hunters' Guild, Cradossk, and upon hatching, he devoured all of his siblings before they hatched, much to his father’s pride. Unbeknownst to Bossk, one of his sisters survived but his father never revealed it to him. Bossk started his work as a Bounty Hunter by hunting Wookies as was customary for Trandoshans. He quickly became well known and eventually started taking on other bounties, becoming one of the most infamous bounty hunters in the galaxy. At one point, during the Clone Wars, Bossk, before he joined the Bounty Hunters’ Guild, engaged in a spaceship dogfight with a Jedi master, Bant Eerin, and her apprentice as the Republic was hunting for Bitt Panith, a scientist for the Confederates. Bossk was defeated and later became wanted by the Republic with a 35,000 credit bounty on his head.

After this, Bossk joined forces with other bounty hunters, Aurra Sing, Boba Fett, and Castas, to hunt down Mace Windu. They managed to crash the Star Destroyer the Jedi Master was on, before going onboard and taking hostages. However, Bossk and his allies withdrew after they saw Windu escape in his starfighter. The bounty hunters went to Florrum to get help from Hondo Ohnaka, a space pirate, and Bossk was left to keep an eye on Slave I, which held two of their hostages. The Trandoshan prepared to kill the two, but Ashoka Tano showed up and took down Bossk, saving the hostages. Bossk and Boba were then arrested by the Republic and while he was in prison, the Trandoshan watched Obi-Wan Kenobi, in the guise of Rako Hardeen, fighting Boba Fett. Bossk aided the young bounty hunter and knocked Kenobi away, causing a distraction that sent the prison into chaos and allowing Bossk and Boba to escape. The two continued to work together and headed for Tatooine, where Bossk met up with other bounty hunters including Dengar, Boba Fett, Oked, C-21 Highsinger, and Latts Razi. After Oked was killed by Asajj Ventress, Bossk and Latts invited her for a drink and got her to replace their dead partner for a job. When she agreed, Bossk and Latts brought her to meet Boba and the rest of their team of bounty hunters.

Major Rigosso had hired the group to protect a chest while it was delivered to his master, Otua Blank, but on the way, they were attacked by Kage Warriors. During the fight, Bossk helped fight them off, but got blinding dust in his face and was knocked off the tram they were on. Despite this, the mission was completed, Bossk received his share of the payment. Later, the Trandoshan joined forces with Skorr and some other bounty hunters to hunt for Kestrel, a Rebel agent but failed to capture her. On another occasion, Bossk met up with Boba Fett again while the young bounty hunter was looking for Connor Freeman. The Trandoshan didn’t think Freeman had a high enough bounty on him and didn’t want to get caught in Boba’s fight with the League of Bounty Hunters. Bossk left him to his search, telling him to have fun playing with dead bounty hunters. At another point, Bossk had an encounter with Chewbacca and Han Solo, as he and his cohorts found a Wookie refuge planet, tracking down the Wookies, who were being led by Chewbacca. Before Bossk could capture the Wookies, Han Solo showed up and landed the Millennium Falcon on the Trandoshan’s ship, trapping him on the planet. Bossk would eventually replace his ship with a YV-666 light freighter, but would still have a score to settle with Chewbacca and Han Solo.

3 years after the Battle of Yavin, Bossk began hunting down the infamous Wookies liberator, Chainbreaker. Succeeding in luring him in by tampering with Imperial routes for the Wookies prisoner transport ship, the Liswarr, to pass through the area, Bossk infiltrates aboard. As he progressed, he noticed a message attributed to him regarding an encounter on the Star Destroyer Executor to hunt the Millennium Falcon but was unable to write down the coordinates until the message was deleted by his own mistake. Once inside, Bossk faces off against a few Wookies, including one he captured years earlier, Rutallaroo, and defeats them all. Soon after, he finally wedges Chainbreaker on the bridge, only to be shocked when the Liberator calls him by his full name and realizes that Chainbreaker is a Trandoshan too. At first laughing at such nonsense, Bossk is once again confused when he notices the striking resemblance between himself and Chainbreaker who actually turns out to be his long lost sister Doshanalalook, the sole survivor of the siblings of Bossk.

Following this revelation, Bossk learned more about his sister, such as how their father gave her to a Wookie in exchange for alcohol and how it made her a friend of the Wookies. Bossk can't help but display his contempt for Doshanatalalook's beliefs against their natural enemies, starting a hostile exchange where Bossk keeps saying that the Trandoshans are and always will be wookie hunters, while Dosh qualifies that this way of life is based only on the lies that she seeks to reveal. The others Wookies suddenly land on the bridge, forcing Bossk to threaten his sister's life if they dare approach. Unperturbed, Dosh offered Bossk to reread the full message on the Falcon hunt that she had intercepted in the meantime while giving her a chance to escape the ship in exchange for a promise: Never hunt the Wookies again. Bossk was initially outraged by his own racial pride until Dosh used his ego against him by mentioning that there were far better bonuses than the Wookies. Bossk ends up reluctantly accepting this unique offer before being forced to say aloud in front of the Wookies that he would never hunt them again. With the obtaining of the coordinates of the Executor in the Anoat system as well as a Data cube provided by his sister containing all the lies of the Trandoshan story, Bossk began to make his way to the exit. He stops briefly to warn Dosh that he could very well break his promise but his sister is more than convinced that he won't because of her confidence. Incredulous, Bossk asked her if she even knew who he was and Dosh just replied that he was her brother.

Bossk was later among the group of bounty hunters hired by Darth Vader to track down Han Solo and Chewbacca and was eager to hunt down his enemies. So as to get information on Solo's location, Bossk had to work with a pair of amateur bounty hunters, Tinian I'att and Chenlambec, who he believed had that information. They also had information on a Wookie intelligence network that could give Bossk the information he needed to find and kill countless Wookies. However, the two turned on the Trandoshan, hacking into his ship's computer and taking it over, before trapping him in a meat locker.

Bossk is a brutal and deadly bounty hunter and because he is a Trandoshan, he can regenerate lost limbs. His main weapon is a Relby-v10 micro-grenade launcher, as well as a common blaster, and he also utilizes thermal detonators and a flamethrower. However, Bossk can fight even without weapons, improvising when he needs to and has even used other beings to fight. His ship is a modified YV-666 light freighter called Hound's Tooth, which also serves as his base. It is equipped with shielding and hyperdrive systems and reinforced armor and for weaponry, it sports a retractable four-barreled laser turret, an ion cannon, and a concussion missile launcher. His physical strength surpasses that of humans and can compete with that of a Wookie. 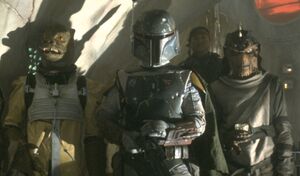 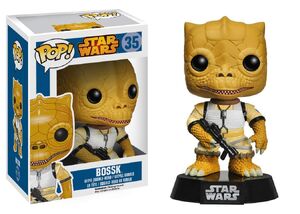 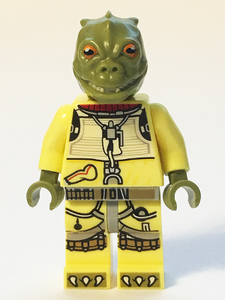 Castas with other hunters