The Tale of Despereaux

Leader of the rat world (formerly, film only)

Eat the humans of the kingdom, so that he and the other rats could dominate the outside world and roam the city for life without any threats or interference.

Kill Despereaux for being different.
Kill Roscuro and any other rat who disagrees with him (all failed).

Botticelli Remorso is the main antagonist of the 2003 fantasy novel The Tale of Despereaux by Kate DiCamillo and its 2008 computer-animated film adaptation of the same name by Universal Pictures. He is a cruel and manipulative sewer rat who serves as the tyrannical leader of the rat world.

He was voiced by Ciarán Hinds, who also played Steppenwolf in Justice League, Mephisto in Ghost Rider: Spirit of Vengeance, Jonathan Reiss in Lara Croft: Tomb Raider – The Cradle of Life, Henry Burke in Trip to Witch Mountain, Mance Rayder in Game of Thrones and Bill Maplewood in Life During Wartime.

When Roscuro falls into the sewers after being abandoned by his friend Pietro and accidentally causing the Queen of Dor to have a fatal heart attack, Botticelli comes across Roscuro and takes him to his kingdom. As a result of the Queen's death, the King passes a law that would ban soup and outlaw rats. Because of that, the citizens of Dor fell into depression and the kingdom became a gloomy place. At his kingdom, Botticelli arranges a feast for his people, but notices Roscuro not joining the other rats. Botticelli asks Roscuro why he's not eating and tells him that nothing in the outside world is there for him. Roscuro leaves and Botticelli's right-hand servant points out that Roscuro will not be like the other rats, but Botticelli states that Roscuro is still a rat, no matter where he comes from.

When Despereaux is later banished to the dungeon for his courageous behavior and talking to Princess Pea, he comes across a prison guard named Gregory, who is sleeping and being mugged by the rats. After Gregory awakens, Despereaux explains to him about Princess Pea wanting the kingdom to go back the way that it was, but Gregory doesn't believe him and throws Despereaux aside. Despereaux is captured by the rats and is placed in a coliseum, where Botticelli unleashes a ferocious cat to kill him. The cat proceeds to attack Despereaux and Botticelli prepares to have him finished off, but Roscuro intercepts him and offers to eat him instead. Botticelli calls off the battle and Roscuro rescues Despereaux as he takes him to his hedeout.

As Roscuro later tries to apologize to Princess Pea about what happened earlier, she, upon recognizing him from the incident, lashes out at Roscuro which causes him to retreat into the dungeon. Upon feeling hurt, Roscuro uses Pea's servant Miggery Sow as his pawn to kidnap the princess and send her to the rats before locking her up in a dungeon cell after double-crossing her. Pea finds Despereaux and informs him to take the necklace to the King to warn him about the danger, but he ends up losing it on the way. Despereaux tries to warn the King about Pea's imprisonment, to no avail. He later tries to inform his people about Pea, but they mistake him for being a ghost. Meanwhile, Chef Andre decides to bring back soup and happiness to the kingdom while he also brings back Boldo. Despereaux finds the two and informs them about Pea in danger, but Andre doesn't believe him and refuses to listen. However, Boldo takes Despereaux to the coliseum, but not before getting attacked by the rats and losing his body.

As Botticelli prepares to have Pea devoured, he announces that there will be rats in the outside world. Botticelli has Roscuro signal the other rats to kill the princess, but when he sees the apologetic sincerity in her eyes, he suddenly has a change of heart and refuses to do the deed. Enraged, Botticelli signals the feast instead and the rats head over to eat the princess. However, Despereaux arrives and unleashes the cat, causing the rats to retreat in terror. Botticelli orders the other rats to attack Despereaux, but he easily manages to defeat them all. However, Botticelli captures Despereaux and attempts to sacrifice him to the cat. Before he could finish off Despereaux, Botticelli is suddenly distracted when he is blinded by the sunlight reflected off Pea's necklace. Roscuro reflects the light at Botticelli and blinds him even more, causing him to fall into the coliseum. Botticelli finds himself confronted by the cat and is chased into the knight helmet. Princess Pea locks the two in by kicking the helmet shut and Botticelli is eaten by the cat.

Botticelli is domineering, oppressive, pompous, and tyrannical. He is a greedy and manipulative sewer rat who plans to devour all the humans of the kingdom, so that he and the rats could have a commanding influence on the outside world and roam the city for life. He is shown to be a sadistic and deceptive trickster, as he loves to trick others and watch them suffer.

Botticelli coaxing Roscuro into his kingdom. 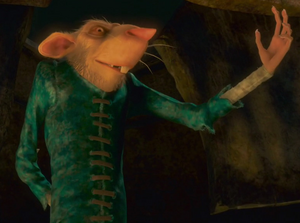 Botticelli waving to the crowd. 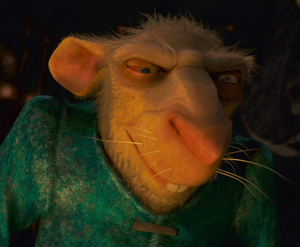 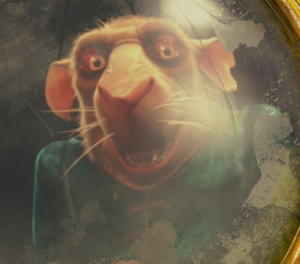 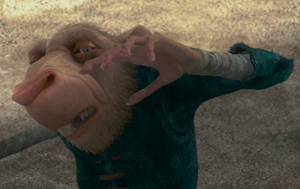