To take over the world.

Bowman (real name: unknown) is a world renowned stealthy assassin and mercenary from the Marvel Universe. He is of a high ranking in HYDRA and is a part of the mirrored Avengers group known as the Hydra Four. Despite being a evil person, he is actually more calmer and kinder than others, but he doesn't consider becoming a Hero.

Bowman was artificially enhanced, in order to become a perfect copy of a certain Avenger, in his case, Hawkeye. He possessed sub-dermal cybernetic implants powered by special material which transmitted footage of Hawkeye in action condensed down to binary information directly to his limbs and muscle groups.

His base of operations is mobile, so he is constantly moving around. When he comes across enemies, he doesn't show mercy too well, and he loves both poetry and quotes. Like his counterpart, Hawkeye, he possesses bows and arrows that are quite similar, and he also has trick arrows (Contains; Webs, Ice, Fire, Electricity, etc.) with explosive tips for maximum damage.

Bowman has teamed up (temporarily) with other Evil Organisations or Evil People (Ultron, Nitro, Titanium Man, Bullseye, etc.) several times, to overun other enemies or to do something with his own plans. However, most of his orders come from either Viper or Baron Zemo, because he doesn't take orders from the Red Skull. 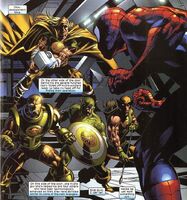 Bowman, alongside the other members of The Hydra Four.

Hawkeye challenges Bowman to a Duel.

Bowman is almost defeated by Captain America.
Add a photo to this gallery
Retrieved from "https://villains.fandom.com/wiki/Bowman?oldid=3534164"
Community content is available under CC-BY-SA unless otherwise noted.