Big Ugly Turtle
Your One and Only King

King of the Koopa Troop

Plotting against the Mario Brothers.

Convert Dinosaur Land into fossil fuel so he can become an oil tycoon.

Destroy the Mario Brothers, Princess Toadstool and Yoshi (all failed).

Bowser Koopa, better known as simply Bowser, is the main antagonist of the White Knuckle Scorin' comic, a one-shot comic that comes with the album of the same name, as well as a loose adaptation of Super Mario World. He is the evil King of the Koopa race who strives to convert all of Dinosaur Land into fossil fuel so he can become an oil tycoon.

Bowser first appears when Mario, Luigi and Princess Toadstool arrive in Dinosaur Land, watching their every movement. As Mario is talking to the Princess, she disappears, and, upon learning from Yoshi that "a big ugly turtle has been muscling in around here", he and Luigi realize that Bowser must have kidnapped her.

In Bowser's Castle, Bowser is explaining his plot to turn Dinosaur Land into fossil fuel so he can join OPEC (which the comic outright states as being "pretty dumb, if you think about it"), to the captured Toadstool. Similarly to the previous statement, Princess Toadstool also calls out Bowser's plan as unintelligent, telling him that he is too ignorant to become an oil tycoon, although Bowser doesn't care, telling the Princess that "ignorance is bliss" (which cues the song of the same name on the album). In the song, Bowser explains to the Princess that she is being used as bait for the Mario Brothers, while also expressing his hatred of the latter and questioning why the Princess values reading and books.

As Mario, Luigi and Yoshi approach the castle, Bowser picks out a spell from his spell book that he believes to have a nasty effect, and gets his son Lemmy to read it, being unable to himself due to leaving his reading glasses in the pantry while reading the nutrition label for "toasted lard chips". Lemmy, using the reading skills the Princess had taught him earlier, reads Bowser's spell, although it ends up creating an illusion that gives the countryside a medieval motif instead of actually harming anyone.

The Brothers and Yoshi arrive at the castle (the spell wearing off as well), and Bowser attacks them with an army of Mechakoopas. Bowser also places Princess Toadstool in a cage that is slowly lowering into a vat of lava, which seemingly kills her when the Brothers are unable to reach it in time. Mario angrily tries to fight Bowser, but, grief stricken, he finds himself unable to and Bowser begins beating down on him. Just then, Princess Toadstool emerges (having escaped the trap due to Bowser idiotically leaving the operating manual in the cage), striking Bowser in the back, allowing Mario to regain his confidence and defeat his enemy. Mario, Luigi, Princess Toadstool and Yoshi (with assistance from Lemmy) defeat the remaining Mechakoopas and Bowser, although, in a last attempt at victory, Bowser has all warp pipes leading out of Dinosaur Land severed, trapping everyone on the island. However, due to Princess Toadstool having stolen Bowser spellbook, Yoshi is able to cast a spell to send his friends home.

Due to the comic's intent of promoting literacy and good education, Bowser essentially symbolizes everything that can happen with bad education. Unlike most interpretations of Bowser's character, this one is illiterate, blatantly incompetent, and makes obviously stupid decisions on a whim for seemingly no reason. He is completely neglectful and irresponsible with his children, the Koopalings, not reading to and seemingly not caring for them, to the point where Lemmy Koopa was willing to betray his father to the Mario Brothers because of how nice Princess Toadstool was to him. He also proves himself to be a sadist when getting the upper hand on Mario, taking great pleasure in tormenting his foe. Despite being more comical, this version of Bowser is arguably worse than his original incarnation, as he is not only willing to destroy the entirety of Dinosaur Land (which would have killed all of the living beings in it, including Yoshi and his species) so he can make a profit, but willing to kill Toadstool as well once she has served her purpose and rubs her "death" on Mario's face to break his spirit, two things the original would never do. 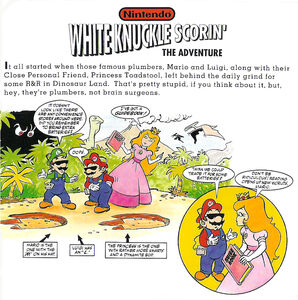 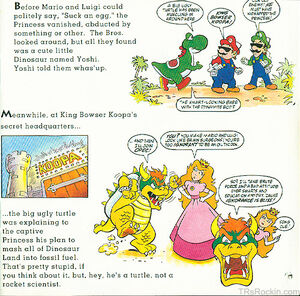 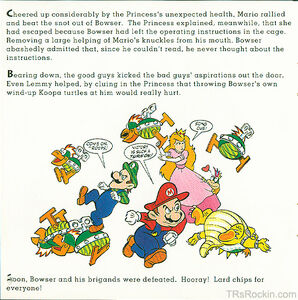