Across the street from Lakewood Plaza Turbo

Boxmore Incorporated, or simply Boxmore, is the primary antagonistic organization of the 2017 animated series OK K.O.! Let's be Heroes. It is an evil company run by Lord Boxman that sells weapons and robot henchmen to supervillains, as well as the business rival of Gar's Bodega.

In the episode "Legends of Mr. Gar", Crinkly Wrinkly, while telling the story of how Mr. Gar created Lakewood Plaza, states that Boxmore was founded sometime after Mr. Gar elbowed Lad Boxman (Lord Boxman's younger self) across the street. Although whether this story is true or not is highly debatable (given Crinkly Wrinkly's fading memory and supposed insanity), Mr. Gar states that what he said is exactly how it happened.

In the episode "Lad & Logic", the real story behind how Boxmore was founded is revealed. According to Mr. Logic, after he was created by Lad Boxman for the purpose of applying more logical reasoning into his schemes, he recommended his creator to use his skill at building evil robots to create a robot manufacturing company in order to further his funds and resources. Boxman and Logic then build the Boxmore factory together, and use it to create an army of robot Junkfish. Despite his newfound success, Boxman diverts his attention to destroying Lakewood Plaza Turbo when he sees Mr. Gar first building it, ignoring Logic's advice and starting the construction of a Mega Junkfish to destroy it. Soon, Mr. Logic, realizing there is more to life than destruction thanks to Gar, abandons Boxmore and helps destroy the Mega Junkfish. Upon witnessing this, Boxman decides to build more loyal robot minions, creating baby versions of Darrell, Shannon, Jethro, and Ernesto. 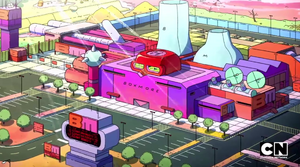